The consignment that reached Vadodara is meant for the districts of Vadodara, Chhota Udepur, Bharuch, Narmada, Panchmahal, and Mahisagar, the officials said. The vaccine stocks were received by local MLA and Assembly Speaker Rajendra Trivedi and others. 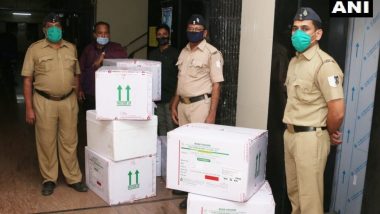 The vaccine vials reached Surat and Vadodara by road and Rajkot by air, three days ahead of the nationwide launch of the inoculation drive on January 16, they said. Covishield and Covaxin Are Safe, Antigens Created by Covaxin Expected To Address Coronavirus Mutants, Says ICMR Scientist Dr Samiran Panda.

As many as 2.76 lakh doses of the coronavirus vaccine, developed by Oxford University and British-Swedish company AstraZeneca and manufactured by the Pune-based SII, had landed at the Ahmedabad airport on Tuesday, the first consignment for Gujarat.

In Surat and Vadodara, the vials reached in temperature-controlled trucks.

The second consignments will cover districts in the state's south, central and Saurashtra-Kutch regions.

In Surat, COVID-19 vaccine doses were received by Gujarat Minister of State for Health Kumar Kanani, state BJP chief CR Patil as well as other local MLAs and leaders with offering of prayers.

The vials have been stored at Surat's civil hospital, from where they will be dispatched to 22 booths within the city for inoculation of 34,000 beneficiaries, including health care and frontline workers, the officials said. From the Surat regional centre, the doses will be dispatched to southern Gujarat districts of Navsari, Valsad, Tapi and Dang, they said.

The 77,000 doses that reached Rajkot by air are meant for Rajkot, Porbandar, Dwarka, Kutch, Morbi and Jamnagar districts. They were received by Minister of State for Agriculture RC Faldu, who broke a coconut and offered prayers on their arrival.

The consignment that reached Vadodara is meant for the districts of Vadodara, Chhota Udepur, Bharuch, Narmada, Panchmahal, and Mahisagar, the officials said. The vaccine stocks were received by local MLA and Assembly Speaker Rajendra Trivedi and others.

Around 17,000 health care and frontline workers will be covered in Vadodara city in the first phase of the vaccination drive. The first consignment of 2,76,000 doses of the vaccine that arrived on Tuesday are meant for the districts of Ahmedabad, Gandhinagar and Bhavnagar zones.