Get latest articles and stories on India at LatestLY. The Delhi High Court's Division Bench on Tuesday issued notice to member Secretary of Delhi State Legal Service Authority (DSLSA) on an appeal moved by actor- environmentalist Juhi Chawla, challenging the single bench order which had dismissed a lawsuit filed against setting up of 5G wireless networks in the country. 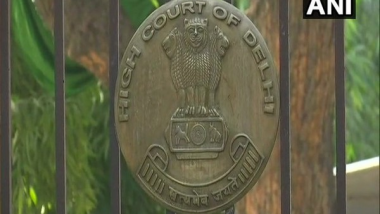 The Bench of Justice Vipin Sanghi and Justice Jasmeet Singh earlier today said "What we propose is that we can't waive off the costs but we can reduce it to Rs 2 lakh. But we have a condition. Since your client is a celebrity, we would want her to do some good for society. The bench also said that a programme may be conducted wherein the DSLSA can get in touch with Juhi Chawla. The Court added that the said programme may be conducted by featuring her and promoting the cause.

Later, Senior Advocate Salman Khurshid, after taking instructions informed the bench that Juhi Chawla would be honoured to participate and help DSLSA for such a good cause.

The bench after noting down the submission posted the matter for Thursday for further hearing.

In the appeal, Juhi Chawla and the other two appellants stated that the single bench order dismissing the suit is bad in law as a suit can only be dismissed once it has been allowed to be registered as a suit by the Court. The actor further stated that the single bench imposed costs on her even after plaint had not been permitted by him to make sure into a 'suit', and acting without jurisdiction, contrary to the law.

The appellant also challenged the single judge's finding that the motion was preferred only to gain publicity, whose motive was inferred by the learned single judge merely from the fact that Plaintiff had circulated the video-conferencing link of the High Court on her social media accounts which had resulted in the repeated disruption of the Court proceedings held on June 4, 2021.

Single Bench of Justice JR Midha had dismissed the lawsuit filed by actress-environmentalist Juhi Chawla and two other petitioners against the setting up of 5G wireless networks in the country. The bench of Justice JR Midha while passing the judgement had said that Plaintiffs (Juhi Chawla and the other two petitioners) abused the process of law and imposed costs of Rs 20 lakh on plaintiffs.

The court in its order said, "It appears that the suit was for publicity. Plaintiff Juhi Chawla circulated the link of the hearing on social media which created the disruption thrice. Delhi Police shall identify the persons and take action against those who created disruption." According to the petition, the plaintiffs sought direction from the "arrayed defendants" to certify that 5G technology is safe for humans and every type of living organism and to produce their studies regarding RF radiation in support. The spokesperson further said that if not already conducted, efficient research should also be conducted without the participation of private interests. (ANI)