The APCL MD said the plant will also contribute in GST collection by giving Rs 80 crore as Goods and Services tax and Rs 30 crore as other taxes. 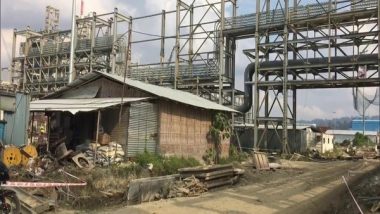 Speaking to ANI, Ratul Bordoloi, Managing Director of APCL said, "The 500 tonnes (TPD) Methanol Plant and 200 TPD Acetic Acid Plant , which will be ready in a few months in the Dibrugarh region of Assam, will create 150 jobs after the completion of the project. Presently, there is a workforce of 350 workers. In total the project will create 500 jobs for engineers and technical professionals and engage indirect manpower of 5,000 people, as our production will surge to 600 metric tonnes from 100 metric tonnes."

"The Assam government has 51 per cent of stake in the project while Oil India Ltd (OIL) has a share of 49 per cent. The total investment in the project will be around Rs 1,709 crores. We are preparing for sequential commissioning from December-end and production will start from January onwards. The plant will generate a turnover of Rs 500 crore," Bordoloi added. Central Vista Project: 'No Construction, Demolition Shall Take Place', Says SC, Allows Centre to go Ahead With Foundation Stone Ceremony of New Parliament Building.

The APCL MD said the plant will also contribute in GST collection by giving Rs 80 crore as Goods and Services tax and Rs 30 crore as other taxes.

"Our country produces 25 per cent of its methanol demand while the rest is imported. This new plant will contribute significantly to the demand of northeast and India, after it gets commissioned in January," Bordoloi said.