He said the gigantic asteroid is estimated to be 97m in width and 230 meter in length which will be around the size of four football fields put together. 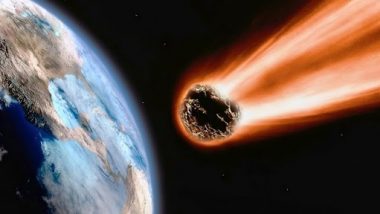 Bhubaneswar, July 24: Amid reports that an asteroid of the size of four football fields is hurtling towards earth but will fly past, Dr Suvendu Pattnaik, Deputy Director of Pathani Samanta Planetarium here said that there is no need to panic as the same asteroid has flown past the planet earlier as well and at a much closer distance.

He said there is no chance of asteroid '2008 GO20' colliding with the earth and noted that it will again revisit Earth in 2034. "We should not panic. We can safely say that it will not hit the earth," Dr Pattnaik told ANI. Asteroids vs Meteoroid; Here a Few Fun Facts To Share In Celebration of Asteroid Day.

"This asteroid has visited earth at a much closer distance of 19 lakh km and 29 lakh km in 1935 and 1977 respectively. At that time, it flew away and never came towards the earth. This time it is around 45 lakh km, which is about 11 to 12 times the earth-moon distance, so there is no danger of hitting the earth," he added.

According to Dr Pattnaik, '2008 G20' will be closest to earth on July 25, 2021 at 11.21 pm as per Indian Standard Time (IST). He said the gigantic asteroid is estimated to be 97m in width and 230 meter in length which will be around the size of four football fields put together.

It is moving towards the planet at a speed of 29,000 kilometers per hour, which is an average of 8 kilometers per second, he added. "Given this high speed, anything that crosses the path of the asteroid will be destroyed," Dr Pattnaik noted.

He said many asteroids orbit the sun between Mars and Jupiter. They range in size from one meter to hundreds of kilometres. These millions of asteroids are sometimes attracted to the earth by gravitational pull. He said 99.9 percent of them are burnt to ashes in the atmosphere before they hit the earth's surface.

"Scientists have now compiled a list of more than 23,628 large asteroids that move closer to earth and are monitoring their movements. Out of these, only 1,045 have been classified as potentially dangerous asteroids which are named as Near-Earth Objects (NEO)," he said.

Many organizations, scientists are keeping an eye on such objects that are approaching earth. Astronomers and scientists have been working tirelessly on how to protect the planet from such a catastrophe.