The counting of votes for Bihar legislative council elections began on Thursday, with the ruling JD (U)'s Dinesh Singh winning from Muzaffarpur. 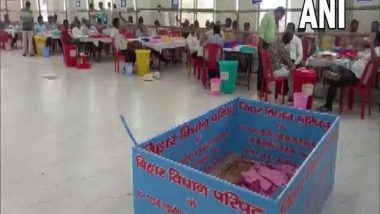 Patna, April 7: The counting of votes for Bihar legislative council elections began on Thursday, with the ruling JD (U)'s Dinesh Singh winning from Muzaffarpur. Arrangements for security have been made for the peaceful counting of votes. In Patna, counting is underway at Aryabhatta University.

Voting for elections in 24 MLC (members of legislative council) constituencies in Bihar was held on Monday. To ensure free and fair voting, adequate armed forces were deployed at the 534 polling stations across the state.

Among the NDA allies, the BJP is contesting on 12 seats followed by the JD(U) on 11 seats, and Pashupati Paras' Rashtriya Lok Janshakti Party on one seat.

On the other hand, from the Opposition, the RJD is contesting 23 seats while its ally CPI is in the fray for the remaining one seat. The Congress is going solo and is contesting 16 seats out of 24. (ANI)