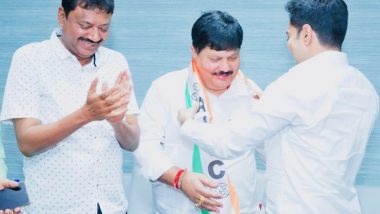 Singh took the membership of the party in the presence of the party's general secretary Abhishek Banerjee in Kolkata.

Welcoming him into the party, Banerjee said that Singh rejected the "divisive forces" (BJP) and joined the party.

"Extending a warm welcome to Shri @ArjunsinghWB, who rejected the divisive forces at @BJP4India and joined the @AITCofficial family today. People across the nation are suffering and they need us now more than ever. Let's keep the fight alive," Banerjee tweeted.

Also Read | Gujarat Shocker: Woman, Called for Questioning As Suspect in Assault Case, Hangs Self Inside Washroom of Police Station in Rajkot.

"Warmly welcoming former Vice President of @BJP4Bengal and MP from Barrackpore, Shri @ArjunsinghWB into the All India Trinamool Congress family. He joins us today in the presence of our National General Secretary @abhishekaitc," TMC tweeted welcoming Singh into the party.

Earlier today, expressing discontent with the working of the BJP, Singh said that the party's working has shortcomings in some states including Bengal and Kerala.

The MP said that he put forward his opinion in front of party national president JP Nadda who said that "he will think about it".

I kept my opinion in front of BJP chief JP Nadda and he said that he'll think about it. BJP has shortcomings in Bengal and Kerala and it's upon the party as a whole how it'll tackle them, being an MP, I can't look into them on an individual level," Singh had told ANI. (ANI)