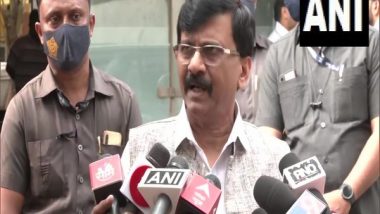 Speaking to reporters here today, Raut said, "False cases are never filed against anybody in Maharashtra. National agencies like NCB, CBI, and ED get trained by the BJP and fabricate false cases, not Maharashtra police. Fadnavis should have patience, his sensational remarks are maligning state police."

Fadnavis, who is also the leader of Opposition in Maharashtra Legislative Assembly, has been demanded the resignation of shield minorities welfare minister and NCP leader Nawab Malik.

Malik was arrested in February by the Enforcement Directorate (ED) in an alleged money laundering case linked with the underworld don Dawood Ibrahim.

Earlier today, Fadnavis cited a case in which advocate Pravin Chavan allegedly tried to frame a BJP leader Girish Mahajan in a 2018 incident of extortion. He alleged that the advocate personally drafted FIR, planned raids by the state agencies, and fabricated evidence to frame Mahajan in the case.

"I have submitted a pen drive which has 125 video recordings which expose the conspiracy, including Chavan's conversation with police officials and various political leaders to frame BJP leaders in false cases," said Fadnavis.

The Opposition leader submitted the pen drive to the Deputy Speaker of the Assembly, which Fadnavis claimed has 125 hours of video recordings of Chavan in multiple conversations with police officials and political leaders.