Brihanmumbai Municipal Corporation (BMC) has formed a four-member committee to probe into the fire incident that took place at a residential building in Mumbai's Tardeo on Saturday. 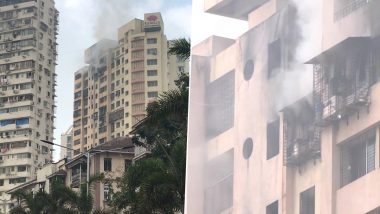 Mumbai, January 23: Brihanmumbai Municipal Corporation (BMC) has formed a four-member committee to probe into the fire incident that took place at a residential building in Mumbai's Tardeo on Saturday.

The committee will be headed by Deputy Municipal Commissioner level officer and a report has to be submitted to the BMC within 15 days.

The fire in 20-storey Kamala building near Mumbai's Bhatia hospital in Tardeo claimed the lives of six people and left 23 injured.

The Maharashtra government has also assured of investigation into the fire incident.

"The fire incident that occurred at the Kamala building in Mumbai's Tardeo area will be investigated. Our guardian minister of Mumbai Suburban Aaditya Thackeray and Mumbai City guardian minister Aslam Shaikh will look into it," Maharashtra Deputy Chief Minister Ajit Pawar said in a statement.

A compensation of Rs 5 lakh for the next of kin for the decesed was announced by state minister Aaditya Thackeray.

Meanwhile, Prime Minister Narendra Modi has announced an ex-gratia of Rs 2 lakh each from Prime Minister's National Relief Fund (PMNRF) to the next of kin of those who lost their lives in the Mumbai residential building fire in Tardeo and Rs 50,000 for those injured in the incident.