Brahma kamal flowers, which used to bloom from August to mid-September, are now blooming in Garhwal of Chamoli district, Uttarakhand in October due to climate change. 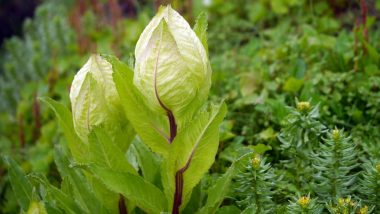 Chamoli, October 10: Brahmakamal flowers, which used to bloom from August to mid-September, are now blooming in Garhwal of Chamoli district, Uttarakhand in October due to climate change. In the upper areas of Rudraprayag district of Uttarakhand, Brahmakamal has continued to bloom in large numbers around Nandikund in the offseason in October.

Although the first snowfall of this season has caused a little damage to the Brahmakamal plants, it is still flowering in huge numbers. According to Divisional Forest Officer (DFO) of the Kedarnath Forest Division, Amit Kanwar, "Brahmakamal is blooming in October due to climate change." Rare Video of 100 Brahma Kamal Flowers Blooming at Home in Mysore Goes Viral; Know How to Grow This Plant at Home.

He said, "Due to no human movement in Bugyal areas, the exploitation of Brahmakamals has lessened. It may also result in good yields of Brahmakamal in the future as well."

He had travelled to Tungnath, Nandikund, and Bansi Narayan as part of a 5-member team to inspect the areas. (ANI)