Etwari, her three injured daughters and 12-year-old son fled to the house of a relative but they could not bring Salmi, Kuchinda Subdivisional Police Officer Rajkishore Mishra said. 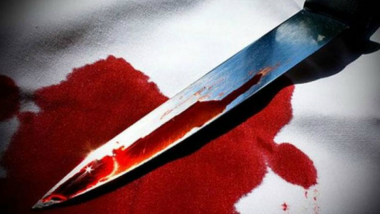 Image is for representational purpose only (Photo Credits: ANI)

Sambalpur, June 12: A 50-year-old man coronavirus patient allegedly killed his three-year-old daughter with a sharp weapon and injured his wife and three other children before dying by suicide in Odisha's Sambalpur district, police said on Saturday.

Sukha Oram tested positive for Covid-19 on June 5 and had been in isolation in his house at Jautukbahal village under Gobindpur police station area. Oram entered the room where his wife and children were sleeping late on Friday night and tried to slit the throat of his three-year-old daughter, Salmi, with the weapon. He attacked his wife, Etwari, when she resisted, police said.

He also wounded his three other daughters, aged between two and 15 years, with the sharp weapon. Etwari, her three injured daughters and 12-year-old son fled to the house of a relative but they could not bring Salmi, Kuchinda Subdivisional Police Officer Rajkishore Mishra said. Maharashtra Reports 10,697 New COVID-19 Cases, 1,966 Fatalities In Past 24 Hours; Death Toll Reaches 108,333 In The State, Crosses 30,000 Mark In Mumbai.

When the police reached their house, they found the child's body and Oram who had slit his own throat in a critical condition, the SDPO said. The man succumbed to his injuries at a hospital. The injured family members were hospitalised. "We are yet to ascertain the exact reason behind the incident and investigating from all angles, including mental anxiety and depression," Mishra added.