Secretary of the health ministry, Rajesh Bhushan wrote the letter to Chief Secretary of States of Andhra Pradesh, Odisha, Tamil Nadu and West Bengal and Administrator of Andaman and Nicobar Island to draw attention for taking immediate necessary measures, in all coastal districts. 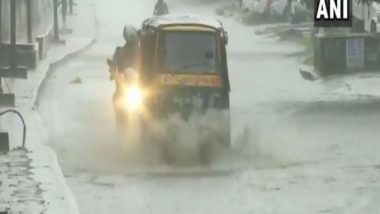 Bhubaneswar, May 21: Due to the effect of Cyclone Yaas which is likely to hit the Odisha coast by May 26, capital city Bhubaneswar witnessed heavy rainfall on Friday. The India Meteorological Department (IMD) has forecast 'rain or thundershowers with strong gusty winds' for Bhubaneswar today.

A low-pressure area is very likely to form over North Andaman Sea and adjoining East Central Bay of Bengal around May 22, which will be named as cyclone 'Yaas,' informed the IMD on Thursday.

In an official media release, the IMD had informed that it is predicted to move North-westwards and reach Odisha - West Bengal coasts around May 26 evening. Cyclone Yaas Live Tracker Map: Cyclonic Storm May Hit West Bengal, Odisha Coasts on May 26, Check Realtime Status Here When It Becomes Active.

The system will be named 'Yaas' once it develops into a cyclone, said IMD.

Meawhile, the Union Ministry of Health and Family Welfare on Friday asked states near the eastern coastline to prepare themselves for Cyclone Yaas that is likely to hit by May 24.

Secretary of the health ministry, Rajesh Bhushan wrote the letter to Chief Secretary of States of Andhra Pradesh, Odisha, Tamil Nadu and West Bengal and Administrator of Andaman and Nicobar Island to draw attention for taking immediate necessary measures, in all coastal districts.

"As per information provided by IMD, a low pressure area is very likely to form over North Andaman Sea and likely to intensify into a cyclonic storm by May 24, likely to move northwestwards and reach near Odisha West Bengal coasts around morning of May 26, as of now. Apart from the impact of Cyclone in Odisha and West Bengal, there may be widespread rains in Andaman and Nicobar Islands and districts of the east coast that may cause inland flooding," Bhushan told Chief Secretaries.

According to the IMD, the Indian Coast Guard (ICG) has initiated extensive pre-emptive measures on the Eastern coast and all the ashore, afloat and aviation units are on high alert.

The national forecasting agency also said that though a fishing ban is enforced on the east coast of India, Coast Guard Dornier aircraft and ships at sea are also broadcasting weather warning to fishermen operating at sea about the likely formation of a cyclone and directing them to return to the nearest harbour for safety. Cyclone Yaas, Gulab, Shaheen and More: Check List of Cyclone Names That Would Occur Over the North Indian Ocean Including Bay of Bengal and Arabian Sea.

ICG has also requested respective State/ UT governments to sensitise fishers and accounting of fishing boats present in harbour and a close liaison is being maintained.