India News | Day Not Far when Indian Navy Will Be Among World's Top 3: Rajnath Singh

Defence Minister Rajnath Singh on Friday said that the day is not far when India's Navy will figure in the world's top three mightiest navies. 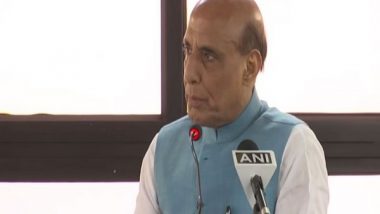 New Delhi [India], June 25 (ANI): Defence Minister Rajnath Singh on Friday said that the day is not far when India's Navy will figure in the world's top three mightiest navies.

He was addressing officers and sailors of Southern Naval Command.

"I have visited Kochi and Karwar. Yesterday, I also reviewed Project Seabird at Karwar, which will be Asia's largest Naval Base in future. I am assured that these ongoing projects will fulfil not just our strategic but also the operational needs," he said.

He further said that in a changing geopolitical and economic perspective, the importance of the Indian Ocean will only increase.

"In a two-year span as the Defence Minister, I was not knowing that Southern Naval Command has a world-class training facility. I am surprised," the Minister said.

Earlier in the day, the Minister reviewed the construction work of the Indigenous Aircraft Carrier (IAC) at the Southern Naval Command.

Expressing his pleasure at first-hand reviewing of the construction work of the IAC, he said that the project was originally approved by the National Democratic Alliance (NDA) government and has made significant progress in the recent past despite COVID. (ANI)