Get latest articles and stories on India at LatestLY. Delhi Government has decided to ban single-use plastic products in Delhi Secretariat from June 1 onwards. 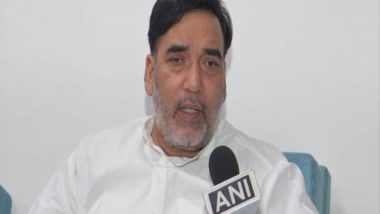 Gopal Rai said, ''The Environment Department under the leadership of Chief Minister Arvind Kejriwal is taking all appropriate steps to combat pollution. The department has also launched a Summer Action Plan to combat the city's rising pollution levels. Single-use plastic contributes significantly to pollution in such circumstances. Plastic spoons and forks, straws, polythene, plastic glasses, and others are made of single-use plastics that cannot be reused are discarded.''

''Many individuals try to destroy plastic products by burning it or dumping it on the ground which contributes greatly to air, water, and land pollution, and poses a major hazard to the environment. Also, given their lightweight, single-use plastic materials have been observed to easily travel through air and water, causing surrounding sewage or drainage systems to choke, and leads to problems of waterlogging,'' he added.

Environment Minister also said that to limit the usage of single-use plastic objects, a public awareness campaign is required. "Instead of using single-use water bottles and cutlery, bamboo, glass/porcelain, metal, or paper cutlery will be used. Moreover, the use of reusable gel/ball/ink pens will be encouraged instead of use-and-throw pens, and only cloth or paper banners will be used to make banners and posters'', added Gopal Rai. (ANI)