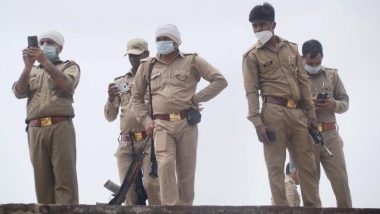 "After the Dhanbad judge case, the district police launched a drive and arrested 17 persons involved in various other cases. As many as 243 old criminals are being interrogated. One sub-inspector other than the Pathardih station in-charge, who allegedly circulated the CCTV footage in which the auto is seen heating the deceased Judge has been put under suspension," said Sanjeev Kumar, Senior Superintendent of Police, Dhanbad district. Jharkhand Judge Killed After Being Hit by Autorickshaw During Morning Walk in Dhanbad, Murder Suspected After CCTV Footage Surfaces (Watch Video).

The SSP further said a total of 53 hotels have been checked to find any concrete evidence in the case. Dhanbad Police is investigating the death of the judge from various angles.

The SIT formed to investigate the case once again visited the crime spot and held a long meeting to discuss the case points. Earlier on Sunday, Umesh Manjhi, the officer-in-charge of Pathardih police station has been suspended from his services in the case of the alleged killing of Additional District Judge Uttam Anand.

On July 28, Uttam Anand was allegedly killed after a vehicle hit him near the Magistrate Colony, Dhanbad. Two people involved in the alleged killing were arrested, and the auto used for the crime has also been seized. The accused, identified as Lakhan Kumar Verma and Rahul Verma, confessed to the crime, said Amol Vinukant Homkar, Inspector General (Ops).

On July 30, the Supreme Court took Suo Motu cognizance of the killing after which a day later, the Jharkhand government recommended a Central Bureau of Investigation (CBI) probe into the killing of the judge.