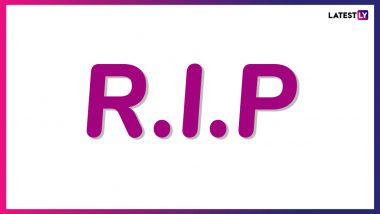 New Delhi, May 19: Former NSG director general J K Dutt, who headed the commando force during the 2008 Mumbai terror attacks, died on Wednesday due to complications arising out of COVID-19, officials said here. He was 72.

Family sources told PTI that the retired IPS officer was admitted to the Medanta Hospital in Gurgaon on April 14 after his oxygen saturation started declining. 26/11 Mumbai Attacks: Another Such Terror Strike Nearly Impossible, Says Rajnath Singh.

"He passed away today at 3:30 pm after suffering a massive cardiac arrest," one of them said. Dutt is survived by his wife, a son, who works in Noida, and a daughter, who is based in the US.