As India observed the 12th anniversary of the 26/11 Mumbai attacks on Thursday, Defence Minister Rajnath Singh said another such terror strike is "nearly impossible". 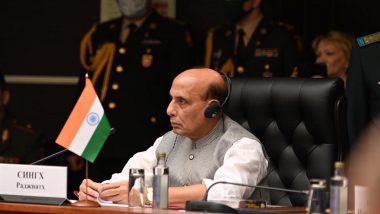 New Delhi, November 26: As India observed the 12th anniversary of the 26/11 Mumbai attacks on Thursday, Defence Minister Rajnath Singh said another such terror strike is "nearly impossible". Rajnath Singh made the statement while speaking at an event. He added the country's air and naval security are better prepared, and described Pakistan as "nursery of terrorism". 26/11 Mumbai Attacks: Amit Shah, Piyush Goyal, Randeep Singh Surjewala And Other Politicians Pay Tributes to Heroes Who Sacrificed Their Lives While Fighting Pakistani Terrorists.

"Centre has designed the nation’s security policy in such a manner that another 26/11 is nearly impossible," Singh said. "Our naval and air forces are much better prepared now. The perpetrators of the 26/11 terror attack used the sea as a route to carry out their designs. After that, there has been a paradigm shift in India’s naval security," the Defence Minister added. 26/11 Mumbai Terror Attacks: PM Narendra Modi Says 'India Can Never Forget the Wounds Inflicted by Terrorists on This Day'.

To keep an eye on suspicious movement in the sea and to avoid unwarranted incidents, a three-tier naval security system has been prepared by the Indian Navy and the Coast Guard, Singh said. Speaking of Pakistan, he said Pakistan has been exposed on the international level for supporting terrorism.

"Pakistan's model of terrorism against India is being demolished, so it is repeatedly violating the ceasefire on borders. Pakistan has been exposed as a nursery of terrorism. It is opinion created at global fora by Prime Minister against terrorism that Pakistan is on FATF's radar," Singh asserted.

(The above story first appeared on LatestLY on Nov 26, 2020 07:20 PM IST. For more news and updates on politics, world, sports, entertainment and lifestyle, log on to our website latestly.com).