Fuel Price Hike: Petrol, Diesel Up by 80 Paise Each, CNG Too Dearer by Rs 2.5/kg 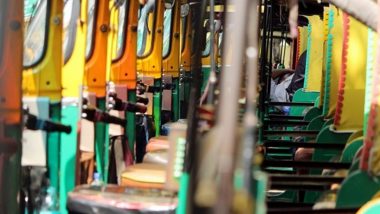 New Delhi, April 4: In another hike in fuel prices, petrol and diesel rates have gone up by 40 paise each on Monday, while the price of CNG has also been increased by Rs 2.5 per kg today. With the 12th price revision in 14 days, the total increase in fuel rates in two weeks is now Rs 8.40 per litre.

In the national capital, petrol and diesel are priced at Rs 103.81 per litre and Rs 95.07 per litre respectively today. While in Mumbai, petrol costs Rs 118.83 (increased by 84 paise) per litre and diesel Rs 103.07 (increased by 43 paise) per litre. Meanwhile, Indraprastha Gas Limited (IGL) has also hiked the price of Compressed Natural Gas (CNG) in Delhi by Rs 2.5 per kilogram. Petrol and Diesel Prices in India on April 4, 2022: Fuel Prices Hiked for 12th Time in 14 Days; Check Rates in Delhi, Mumbai and Other Metro Cities.

With the new price that will come into effect from today, April 4, CNG will now cost Rs 64.11 per Kg in the national capital. The increase in prices has also created a political uproar as the Opposition has been staging protests and demanding a decrease in fuel prices.

Today, CPI Rajya Sabha MP from Kerala, Binoy Viswam gave a Suspension of Business notice in Rajya Sabha under rule 267 over "the increase in prices of petrol, diesel, LPG and kerosene..." There had been a pause in the revision of fuel prices since November 4 last year, which was broken on March 22, following the crude oil going upwards in the wake of the Russian military operations in Ukraine.

Meanwhile, Congress is holding a nationwide protest campaign 'Mehngai Mukt Bharat Abhiyan' against price rises under which it is organising rallies and marches across the country from March 31 to April 7. Notably, on November 3 last year, the Centre had cut excise duty by Rs 5 per litre on petrol and Rs 10 per litre on diesel to bring down the retail prices across the country. Following this, several state governments had reduced Value-Added Tax (VAT) on petrol and diesel to provide relief to people.