The repeated, albeit unsuccessful, attempts to polarise the agitation along regional, communal and other lines are also reprehensible, they said. "Such an approach can never lead to a solution," the letter stated. 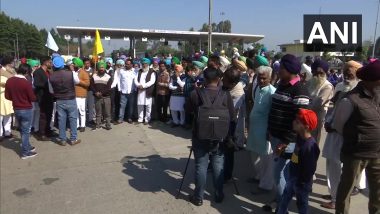 New Delhi, February 6: The central government's approach towards the farmers' protest against the three new farm laws has been an adversarial and a confrontationist one from the very beginning, a group of former civil servants said in an open letter written on Friday.

The letter signed by 75 former civil servants, including Najeeb Jung, Julio Riberio and Aruna Roy, who are part of the Constitutional Conduct Group (CCG) also said that the apolitical farmers are being treated like "an irresponsible opposition to be derided, demonised and defeated".

The repeated, albeit unsuccessful, attempts to polarise the agitation along regional, communal and other lines are also reprehensible, they said. "Such an approach can never lead to a solution," the letter stated. Chakka Jam: Security Tightened in Parts of Delhi, Extensive Barricading Seen at Ghazipur Border; Heavy Deployment of Police at Red Fort As Preventive Measure.

If the government of India is indeed interested in an amicable solution, instead of proposing half-hearted steps such as putting the laws on hold for 18 months, it can withdraw the legislations and think of other possible solutions, given the basic constitutional position that the subject of agriculture is in the State list in the Constitution, it said.

"We in the CCG have, on 11 December 2020, issued a statement supporting the stand of the farmers. All that has happened since has made us feel even more strongly that great injustice has been done and continues to be done to the farmers," the letter said.

The former civil servants urged the government of India (GoI) to take "remedial action" on an issue which has caused "so much turmoil in the country over the past several months".

"We reassert and reiterate our support to the agitating farmers while expecting the government to provide a healing touch and to solve the issue to the satisfaction of the stakeholders," the letter said. The former civil servants said that they note certain developments with "grave concern".

"The approach of the government of India towards the farmers' protest has been an adversarial and confrontationist one from the very beginning, treating the apolitical farmers like an irresponsible opposition to be derided, demonised and defeated," the letter said.

The former bureaucrats said they were "particularly concerned about the developments that took place on 26 January 2021, Republic Day, the efforts to lay the blame on the farmers for the disruption of law and order on that day and the events that have followed".

Farmers, protesting against the laws at border points of Delhi for over two months, took out a tractor rally on January 26. But some farmers violated the designated routes and reached the Red Fort. Some of them hoisted religious flags there.

The former civil servants questioned as to why sedition charges were made out against certain journalists and a Member of Parliament of an opposition party on flimsy grounds, solely for certain tweets posted by them when the factual position was not clear.

"The registration of the same case with very similar First Information Reports in various states run by the BJP smacks of vindictiveness and seems to be aimed at muzzling legitimate, democratic protests against the policies of the GoI,” the letter said.

Holding or presenting a view against the government or reporting different versions given by different people about an incident can, under no law, be held as an act against the nation, it said. Farmers' Protest: UN Human Rights Body Urges Indian Government And Protesting Farmers to 'Exercise Maximum Restraint'.

"It bears repetition to say that a protest against a policy or action of the government is not an act of sedition against the nation,” the letter said. Withdrawal of cases against the farmers and tweeters, including the journalists, withdrawal of cases against all except miscreants who engaged in unlawful activities and stopping the vicious and sickening propaganda of calling the farmers Khalistanis are the minimum requirement for a conducive atmosphere for resumption of talks, it said.

Thousands of farmers, mostly from Punjab, Haryana and Uttar Pradesh, have been protesting at Delhi's borders demanding the rollback of the Farmers' Produce Trade and Commerce (Promotion and Facilitation) Act, 2020, the Farmers (Empowerment and Protection) Agreement on Price Assurance and Farm Services Act, 2020 and the Essential Commodities (Amendment) Act, 2020.