Since there was no registered recipient for the lung in Goa, it was offered to the rest of the country and NOTTO allocated the lung to Tela 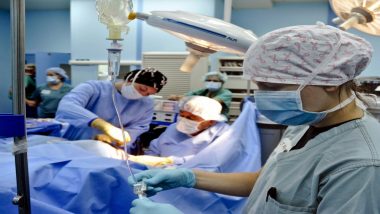 Panaji, December 9: The heart, liver, lungs, and kidneys of a brain dead road accident victim were transplanted on other recipients under the state government's deceased donor transplant programme known as the Nave Jivit.

The State Organ and Tissue Transplant Organisation (SOTTO), Goa Medical College (GMC) and the Directorate of Health Services (DHS) created history on Wednesday when they harvested organs from its first deceased donor.

The donor, a 21-year-old boy from Chattisgarh was admitted to GMC on November 30 with severe head inquiries following a road accident. After a clinical diagnosis of brain death was made and the relatives prognosticated about the same, they stepped forward with a request for organ donation.

SOTTO team counselled the relatives and with their permission initiated the process. The cascade being the ICU played a vital role with guidance from Intensivist from Mumbai in maintaining the donor. Also Read | Jammu & Kashmir DDC Elections 2020 Phase 5: Over 8 Lakh Voters to Decide Fate of 299 Candidates Tomorrow.

After the brain death certification was done, as per the waiting list currently which is only of GMC, the SOTTO team contacted the potential recipient for the workup.

The other organs were offered to the region and allocation was done of the liver and heart as per the waiting list. Since there was no registered recipient for the lung in Goa, it was offered to the rest of the country and NOTTO allocated the lung to Telangana.

The liver has been successfully transplanted onto a 59-year-old male admitted at Nagpur. All the recipients are doing well. The kidney recipients at GMC are also doing well, a press note stated.