SP Shankar, a Class 6 student from Hyderabad, is a versatile kid with multiple talents and skills at the tender age of 11 years. He is a passionate cuber and a robotics enthusiast. 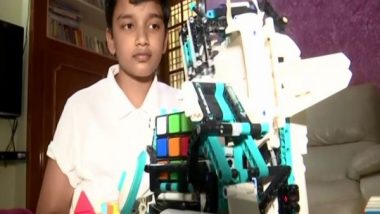 Hyderabad, April 17: SP Shankar, a Class 6 student from Hyderabad, is a versatile kid with multiple talents and skills at the tender age of 11 years. He is a passionate cuber and a robotics enthusiast. He can play musical instruments like violin and piano and he enjoys playing some classical pieces on them. Not just that, he is a wonderful swimmer and a pro-Skater too.

In his early days, Shankar has shown interest in solving Rubik's puzzles at the age of 6, since then he has been consistently practising by following tutorials available on YouTube all by himself without any professional guidance. Over the next few years, he has developed some speed-solving techniques and created his own styles. Elon Musk Offers Teenager $5,000 To Stop Twitter Bot That Tracks His Private Jet Location.

Apart from being a speed-cuber, Shankar has also developed his computer and coding skills over these years and learned some programming and robotics.

Since his childhood, Shankar was fascinated with building different robots using DIY kits and he was able to understand and analyze the instructions given even at the tender age of 6. When he saw some innovations made by inventor David Gilde of the USA, he was awestruck. David's designed Rubik's cube-solving robot using a Lego Kit has caught his attention and he is now determined to build a similar robot using the skills he has developed over the past few years in Cube solving and Robotics.

With the inspiration he drew from David's design, Shankar has built a Robot using a similar Lego kit. This special kit was bought from Singapore, as it is not available in the Indian market. The kit was originally designed for making robots that can move and do some simple tasks, but the same kit is modified to make a cube-solving machine. The brain of this robot is the processing unit that is loaded with a code that is written in Python programming language, this processor drives the motors attached to the arms of the robot and takes the inputs from the colour and distance sensors installed on it. The code is written in line with the CFOP (Cross, F2L, OLL, PLL) algorithm, the method that is used by most of the speed Cubers.

"It takes about 15 seconds to inspect what colour it is and 40 seconds to solve it. It is solved with 40 to 45 moves", said Shankar. Divya Mangala, Shankar's mother said, "He was a very curious child since his birth, he made a DIY solar robotic kit when he was in UKG for which he received a standing ovation in school. Since then his passion for cubing and coding Started. He can solve a cube in 15 to 12 seconds. He holds six world records and a few are in the pipeline."

Shankar also made a self solvable Rubix cube Robot that solves 3x3 Rubix cube by itself. His passion is to go to IIT and MIT and pursue a career in robotics.