Get latest articles and stories on India at LatestLY. Indian Army organised the winter sports tournament at Panzgam in Kupwara district on Sunday. 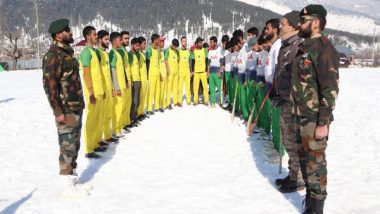 Indian Army with the cricket team in winter sports tournament.

It was first the kind event in Panzgam wherein games were played over the snow surface. The winter sports included snow cricket tournament and 100m race in three age categories.

According to the Indian Army, there are four teams in cricket-- two from Panzgam and one each from Rawatpura and Lunahare, who participated in the one-day tournament.

The youth was in high spirits and passion during the game. Indian Army also revealed that the final match was played between Panzgam Young Boys and LLunahareion Kings where Panzgam Young Boys won the cricket tournament by 20 runs.

"Children and youth participated wholeheartedly and the winners were awarded accordingly," the Indian Army said.

Village sarpanch, ward members and other respectable persons from Panzgam village and neighbouring villages were present during the event.

Locals turned out in huge strength to witness and also thanked the Indian Army for organizing the first-ever winter sports tournament in this area. (ANI)