Voting in all 234 assembly constituencies in 38 districts of the state had begun at 7 am. As per the Election Commission, Karur reported the highest voter turnout at 77.21 per cent. 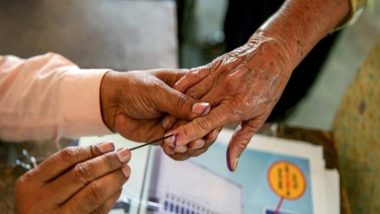 Chennai, April 6: Tamil Nadu recorded a voter turnout of 65.11 per cent in the single-phase Assembly elections that took place on Tuesday. Voting in all 234 assembly constituencies in 38 districts of the state had begun at 7 am. As per the Election Commission, Karur reported the highest voter turnout at 77.21 per cent. Other districts where voters came out in large numbers to cast their votes are Kallakurichi (74.41 per cent), Namakkal (74.99 per cent), Perambalur (74.51 per cent) and Ariyalur (72.99 per cent). Chennai reported a turnout of 50.56 per cent.

In Edappadi constituency, where Chief Minister Edappadi K Palaniswami is contesting, a voter turnout of 73.00 per cent was recorded, while Kolathur, where DMK chief MK Stalin is up against AIADMK's Adhi Rajaram, recorded a turnout of 48.20 per cent was registered. Assembly Elections 2021: Voting Begins in Tamil Nadu, Kerala, Puducherry, And For Phase 3 of West Bengal, Assam Polls.

Coimbatore (South), from where actor and Makkal Needhi Maiam leader Kamal Haasan is making his electoral debut, recorded a turnout of 55.44 per cent. Several leaders cast their votes today, including incumbent Chief Minister Edappadi K Palaniswami, who urged voters in the state to do the same after he voted at a polling station in Siluvampalayam.

Meanwhile, actors Rajnikanth and Vijay, and actor-turned-politician Kamal Hassan also cast their vote in the first and final phase voting of the state Assembly polls. Tamil actor Vijay rode a bicycle to the polling station at Vels International Pre School, Neelankarai in Chennai.

A total of 3,998 candidates are in the poll fray in a single phase. In order to combat the COVID-19 spread, the number of polling stations has been increased to 88,937.

AIADMK MP P Ravindranath's car was allegedly attacked when he went to inspect polling in Bodinayakanur constituency from where his father and Tamil Nadu Deputy Chief Minister O Panneerselvam is contesting the elections.

Tamil Nadu is witnessing a fierce battle between arch-rivals All India Anna Dravida Munnetra Kazhagam (AIADMK) and MK Stalin-led DMK. DMK, which has been out of power since 2011 in the state, is in a head-to-head battle with the ruling AIADMK in nearly 130 constituencies.

AIADMK is contesting the poll in a pre-poll alliance with the Bharatiya Janata Party (BJP) and the Paattali Makkal Katchi (PMK). PMK and BJP are contesting in 23 and 20 constituencies respectively in the 234-member Tamil Nadu assembly while the AIADMK has fielded its candidates for the rest of the seats.