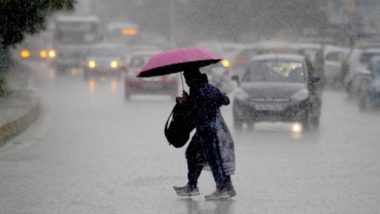 Kochi, Oct 24: The India Meteorological Department on Sunday issued an orange alert to four districts of Kerala for October 26 and a yellow alert to other districts for Monday.

The orange alert denotes rainfall of 6-20 cm while a yellow alert means 6-11 cm of heavy rains. The four districts are Kollam, Pathanamthitta, Kottayam and Idukki.

The other districts for which a yellow alert has been issued excluding Kannur and Kasaragod.

"With the likely setting in of northeasterly winds in the lower tropospheric levels over Bay of Bengal and extreme south Peninsular India, the southwest monsoon is likely to withdraw from the entire country during the next 48 hours. Simultaneously, the northeast monsoon rains are also likely to commence over southeast Peninsular India during the next 48 hours," the IMD said in a statement.

Meanwhile, Malappuram and Palakkad districts reported heavy rains resulting in many rivers overflowing. However, there are no reports of any loss of life yet.

Kerala has witnessed heavy downpour on October 15 and 16 resulting in widespread damage to life and property.