Despite getting bail in the last pending case of the fodder scam more than a week back, RJD president Lalu Prasad's release from jail has further been delayed till May 3 when the lawyers are expected to resume courts works following restrictions imposed by the Jharkhand Bar Council in view of coronavirus surge. 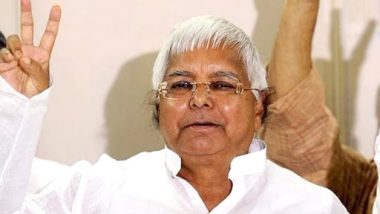 Ranchi, April 27: Despite getting bail in the last pending case of the fodder scam more than a week back, RJD president Lalu Prasad's release from jail has further been delayed till May 3 when the lawyers are expected to resume courts works following restrictions imposed by the Jharkhand Bar Council in view of coronavirus surge.

Prasad had acquired bail from the Jharkhand High Court on April 17 in the Dumka treasury case of the multi-crore rupees fodder scam on completion of half the sentence period, paving way for his release from jail. The bail order was given by Justice Aparesh Kumar Singh. Lalu Prasad Yadav Gets Bail in Fodder Scam Case, May Walk Out of Prison Soon.

Prasad's lawyer Devarshi Mandal had said at that time that they will move Special CBI court in Ranchi after it opens on April 19 to seek his release following High Court order.

But, the process was delayed as the state bar council in a meeting on April 18 told lawyers to keep away from courts in view of large-scale infection of judicial staff.

The bar council again on April 25 extended the ban by another week till May 2. Prasad's lawyer Prabhat Kumar told PTI Tuesday that till the bar council lifts the restrictions the process cannot be started. Bar council secretary Rajesh Pandey said another meeting will be held on May 2 to decide future course of action.

The RJD chief is in judicial custody in AIIMS New Delhi since January this year.

Talking about release procedure, Prasad's lawyer Devarshi Mandal had said, they are getting a signed application from Prasad which will be submitted to the CBI court along with the HC order.

Since his signed application will be there so Prasad need not appear in person before the CBI court, he had said. The CBI court will then send the order to Birsa Munda Jail in Ranchi, in whose custody Prasad was originally sent by the court.

The Birsa Munda jail authorities will send the relevant papers to Tihar jail in the national capital, in whose custody Prasad is at present, which will enact the release process of Prasad, Mandal said. If things would have materialised on time, Prasad could have been freed after 39 months and 25 daysof incarceration.

While allowing bail prayer to Prasad, the court had directed him to submit his passport and not leave the country without permission. It had also instructed him not to change his address and mobile number during the bail period.

The court also ordered him to deposit Rs 5 lakh penalty amount each in two cases-one under IPC sections and another Corruption Act- and two sureties of Rs one lakh each. While sentencing Prasad in the Dumka case on March 24, 2018 to 14 years in jail, a special CBI court of Ranchi had also imposed a fine of Rs 60 lakh, Rs 30 lakh each under IPC sections and corruption Act. The instant case is related to fraudulent withdrawal of Rs 3.13 crore from the Dumka treasury in the early 1990s.

Prasad had acquired bail in three other cases of the fodder scam-Deogarh, Chaibasa and Ranchi's Doranda trasury cases- and was waiting for judgement in the Dumka case. The 73-year-old RJD supremo was airlifted to AIIMS New Delhi on January 24 last in view of his bad health. The Rs 950 cror fodder scam took place in the Animal Husbandry department in Bihar when Prasad was the chief minister.

Lalu is in Ranchi jail after his sentence in Rs 89 lakh Deogarh trerasury case on December 23, 2017. The RJD chief's son and leader of opposition in Bihar Assembly Tejashwi Yadav has said earlier that notwithstanding bail and even after completion of release procedure,seeing his medical condition Prasad would continue at Delhi AIIMS for some more time and would come to Patna residence only after recuperating fully and on advise of the attending doctors.