Lalu Prasad Yadav Gets Bail in Fodder Scam Case, May Walk Out of Prison Soon

Former Bihar chief minister Lalu Prasad Yadav is likely to walk out of prison soon. The Jharkhand High Court on Saturday granted him bail in connection with withdrawal of Rs 3.5 crore from the Dumka treasury, in connection with a case linked to the multi-crore fodder scam. 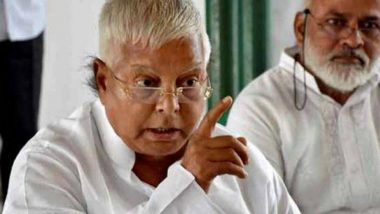 Patna, April 17: Former Bihar chief minister Lalu Prasad Yadav is likely to walk out of prison soon. The Jharkhand High Court on Saturday granted him bail in connection with withdrawal of Rs 3.5 crore from the Dumka treasury, in connection with a case linked to the multi-crore fodder scam.

Justice Aparesh Kumar Singh, granted bail to the Rashtriya Janata Dal (RJD) leader during the hearing on Saturday. Bihar Fodder Scam: Everything You Want to Know About the Scam and Cases That Got Lalu Prasad Yadav Convicted.

The former Bihar CM has been convicted in wrongful withdrawal of money to the tune of Rs 1,000 crore from Dumka, Chaibasa and Deoghar treasuries and the special CBI court at Ranchi has already granted him bail in two cases registered in Chaibasa and one in Deoghar.

After the bail granted in Dumka treasury case, he is likely to be released from jail soon.

During 1991 to 1996, officials of animal husbandry department of Bihar government allegedly drew money from Dumka, Chaibasa and Deoghar when Yadav was the chief minister of Bihar.

Jharkhand attained statehood in 2000 and became a separate state.

At present, Yadav, 72, is recuperating from severe illness in AIIMS Delhi. He has already completed a 42-month jail term.

He is reportedly suffering from 16 diseases including severe infection in kidneys and water accumulation in the lung.

Earlier, serving a prison term in Ranchi's Hotwar jail, he was shifted to Delhi AIIMS after doctors informed the court about 75% of his kidneys not functioning. On this ground, the high court has granted permission to shift Lalu Prasad Yadav to Delhi for better treatment o January 23 this year.

After the bail, the party released a statement in which it thanked the court. The top leadership of the party has appealed to supporters to celebrate his bail by following Covid protocol. "Our countrymen are undergoing a tough period due to pandemic. Hence, we have to follow covid protocol. No one must come to 10 circular road, the official residence of former CM Rabri Devi for celebrations. Bail to our leader has spread great enthusiasm among party supporters and leaders," the statement said.

(The above story first appeared on LatestLY on Apr 17, 2021 03:31 PM IST. For more news and updates on politics, world, sports, entertainment and lifestyle, log on to our website latestly.com).