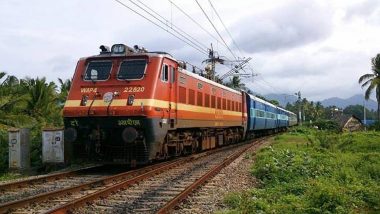 Mumbai, July 24: A mega block has been announced for the Harbour Line in Mumbai on Sunday, according to the Central Railway. "On Sunday, we are announcing mega block on harbour line. There has been quite some damage between Badlapur, Vangani and Karjat sections, which have been restored, Shivaji Sutar, the Chief Public Relations Officer (CPRO) of Central Railway said.

In past one week there was heavy rain in Mumbai and around, Central railway services were also affected due to this. Almost all services are resumed now, the CPRO said.

Sutar said the blockage for the main line has been cancelled and in the suburban network, the restoration work is underway at a small patch between Karjat and Khopoli. Trains on Both Ghat Sections of Mumbai Division Are Running Towards Pune & Nashik.

"Trains on both ghat section of Mumbai division are running towards Pune and Nashik. The services were restored on July 22", said the officer. According to the CPRO, services at harbour line, trans-harbour line and main line sections have been resumed.

"Our team has worked on a war footing in ghat sections that were affected due to heavy rain on July 22. We managed to restore traffic on the same day. There were landslides and boulder falling incidents" he added.

Maharashtra Chief Minister Uddhav Thackeray earlier today left Mumbai by helicopter for Raigad and then by road to survey the worst-hit village of Taliye near Mahad to review the flood-like situation following incessant rain. A total of 44 bodies have been retrieved from the debris of rainfall triggered landslide in Mahad.

The state has announced Rs 5 lakh compensation to families of those killed and said it will foot the bill for treatment of those injured. Maharashtra Minister of Relief and Rehabilitation, Vijay Wadettiwar said that 136 accidental deaths have been reported in Maharashtra till last evening due to rain and other monsoon-related incidents.

Torrential rains over the last few days in the state have led to floods and landslides in the several districts of Maharashtra. Raigad, Ratnagiri, Palghar, Thane, Sindhudurg, Kolhapur, Sangli and Satara districts have been worst affected. Visuals showed that Tandulwadi and Kanegaon villages have submerged completely and.

A total of 26 National Disaster Response Force (NDRF) teams have been engaged in relief and rescue operations. The Army, the Navy, the Coast Guard and other groups have been mobilised to rescue the stranded people and co-ordinate evacuations and aid for displaced people.