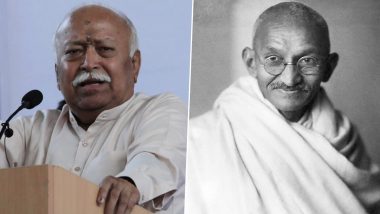 New Delhi, January 1: At the release function of a book "Making of Hindu patriot" organised at Gandhi Darshan at Rajghat, Rashtriya Swayamsevak Sangh (RSS) chief Mohan Bhagwat on Friday quoted Mahatma Gandhi as saying that "my patriotism originates from my religion." "Gandhiji said that my patriotism originates from my religion. I will understand my religion and become a good patriot and inspire others to do the same," Mohan Bhagwat said at the book release function. RSS Chief Mohan Bhagwat Wants 'Nationalism' Word to be Avoided, Says It Refers to 'Hitler, Nazism'.

Authored by Dr Jitendra Kumar Bajaj and Professor MD Srinivas, the book has been published by Centre for Policy Studies in association with Har Anand Publishers. Bhagwat released the book containing 1,043 pages on the occasion. Speaking to an august gathering that included scholars, academicians, social thinkers, Bhagwat said that Gandhiji had expressed his views about religion and said, "My religion is the religion of all religions, that is, the religion that carries all religions together is my religion." Asaduddin Owaisi Says 'Muslims Are Not Kids to be Misguided' Over Mohan Bhagwat's CAA Remark.

Bhagwat said that Gandhiji has written a lot, but he became an example of what he wrote and practised it. In fact, the ideal people are such that instead of preaching to others, they set an example for them, he added. The RSS chief said that the fight for freedom for Gandhiji was not just a fight to change those in power, but it was a fight to rebuild India. Gandhiji has called it a struggle of civilisations and said that "To understand what Swaraj is, we have to understand Swadharma. Till we do not understand Swadharma, we cannot understand Gandhiji's Swaraj".

Bhagwat said that Mahatma Gandhi's values and thoughts are more thoughtful and exemplary today. But he lamented that we are not able to follow them. "We should follow his life and thoughts," he said and called upon the people present to teach all the people about religious conduct and instil in people a sense of affinity towards all religions. "Only then will Gandhiji's dream of Swaraj come true", he said.

Regarding the book 'Making of the Hindu Patriot' he said it was a certified, researched book. If Gandhiji is to be understood, it is necessary to read this book. In his address, Minister of State for Culture and Tourism (Independent Charge) Prahlad Singh Patel said, "I have tried to read and live Gandhiji as per my ability" and added that the context and timing of this book are important and congratulated the authors for the release of this book.

Earlier, the Shankaracharya of the Kanchi Kamakoti Peetham, Vijayendra Saraswati said that Gandhiji was associated with religion. "On October 15, 1927 Gandhiji discussed a wide range of topics with Chandrasekaran Saraswati in Kerala. He said that patriotism and devotion should go together. Gandhiji was a social and religious person. The publication of an authentic book about him is a commendable work," he said.

Author of the book Dr JK Bajaj gave a detailed insight about the book. He said that by studying Gandhiji, he found that he had seen religion in everything he did. On this occasion, the co-author of the book, Professor MD Srinivas also expressed his views through the virtual medium. At the release ceremony, the Chancellor of the Central University, Dr Mahesh Sharma, Narendra Kumar of Har Anand Publication, Basant, former Advisor GSDS, Govindacharya, Dattatreya Hosabole along with other dignitaries were present. (ANI)