Days after the central leadership of the Bharatiya Janata Party took stock of the unrest within the government and the organisation in Tripura, party chief JP Nadda too is likely to make a visit to the state soon. 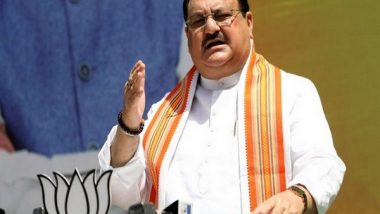 New Delhi [India], June 25 (ANI): Days after the central leadership of the Bharatiya Janata Party took stock of the unrest within the government and the organisation in Tripura, party chief JP Nadda too is likely to make a visit to the state soon.

This comes soon after BJP's ally Indigenous People's Front of Tripura (IPFT) leader and minister of Tribal Welfare department in the state government, Mevar Kumar Jamatia's visit to the national capital to rework intricacies of the alliance.

Jamatia has met the BJP chief who has reportedly assured that during his impending visit to the state all issues will be resolved for smoother functioning of the alliance, sources in the IPFT stated.

Earlier, BJP's National General Secretary BL Santhosh had visited Tripura and collated feedback from ministers, MLAs and MPs on the state of affairs.

Also with Cabinet expansion likely, sources in the IPFT said that they would want to have one of the four Cabinet seats lying vacant. At present, IPFT has 8 MLAs in the House.

BJP leadership in the state, however, believes that IPFT has nothing to lose by staying with the BJP.

"In the elections of Autonomous District Council, they got a fair share of seats and they lost all. Their vote bank is tribal-dominated. They still have two leaders in the Cabinet," said a senior BJP leader from the state.

Also, losing ground to opposition in tribal areas, IPFT wants BJP led government to fulfill its demand to give jobs to tribals.

IPFT, while acknowledging that they haven't been able to win the seats in ADC elections maintained that they still got 12 percent share in the polls and that not all is lost.

Indigenous People's Front of Tripura, ally of BJP in the state is demanding recommendations of the High power modality committee constituted by MHA in 2018 on socio- economic development be submitted soon.

Another demand is to have Scheduled Tribes population of the state , special recruitment drive be started to fill up backlog and current vacancies

"In conclusion for improving delivery of good governance in the state we need better coordination with the state government administration and also alliance political party in power," the memorandum that IPFT leader have to Nadda reads.

BJP had stormed to power in the State after dethroning the Communist government of Manik Sarkar in the 2018 assembly polls. In the ruling coalition in the 60-member Tripura Assembly BJP has 36 MLAs and eight of the Indigenous People's Front of Tripura (IPFT). (ANI)