According to sources close to the developments, there has been an overwhelming response to India's invitation. Several countries including Russia and Iran have confirmed participation in the meeting, in which, not just Afghanistan's immediate land neighbours are invited but also Central Asian countries are invited. 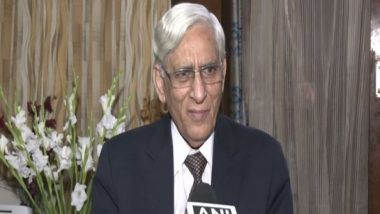 New Delhi, November 6: As India is set to host the regional security dialogue on Afghanistan on November 10, two months after the Taliban took control of Kabul, defence expert Major General (retired) PK Sehgal has said that the meeting assumes utmost importance as India is concerned that the Afghan territory does not become a source of terrorism, hence the security of the region is paramount.

Speaking to ANI, Sehgal said, "This meeting is absolutely important for India. India has got deep relations with Afghanistan. They have got economic interests, diplomatic, political and as well as security implications."

The meeting will be conducted at the national security advisor (NSA) level, sources said on Friday. The NSA-level talks will be chaired by India's National Security Adviser Ajit Doval. Taliban Bars Women from Operating as Aid Workers in Afghanistan, Says Human Rights Watch.

"As far as the relationship with Afghanistan is concerned, India does not want Afghanistan, under any circumstance, to carry out any terrorist activities against India," he said underlining the security concerns in the region after the regime change in Afghanistan.

Notably, the invitation for the meeting has been formally extended by India to China and Pakistan and others including Russia, Iran, Tajikistan and Uzbekistan. According to Sehgal, Pakistan through its media has refused to join the meeting.

According to sources close to the developments, there has been an overwhelming response to India's invitation. Several countries including Russia and Iran have confirmed participation in the meeting, in which, not just Afghanistan's immediate land neighbours are invited but also Central Asian countries are invited.

"This meeting has got very important implications. I am certain that the meeting would be a success. It is a mega initiative by National Security Advisor (NSA) Ajit Doval," Sehgal said.

Two earlier meetings in this format have been held in Iran in September 2018 and December 2019. The third meeting in India could not be held earlier due to the pandemic. Pakistan: Hidden Cameras Found in Karachi Private School Washrooms.

Sehgal said, "In all the meetings that have been held in Russia and central Asia, as well as middle-East. So, India has now taken the initiative to carry out a similar meeting in India where all the Central Asian Republics, and not only immediate neighbours, will be participating for the first time."