New Delhi/ The Bharatiya Janata Party (BJP) on Wednesday said that post-poll violence in West Bengal over the past two months is similar to the 1946 Calcutta killings. 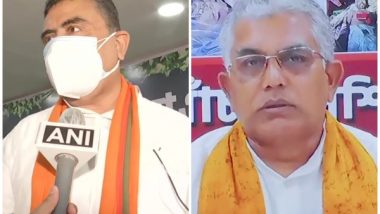 New Delhi/Kolkata (West Bengal) [India], July 21 (ANI): The Bharatiya Janata Party (BJP) on Wednesday said that post-poll violence in West Bengal over the past two months is similar to the 1946 Calcutta killings.

Speaking to ANI, Leader of Opposition in West Bengal Assembly Suvendu Adhikari said that the BJP expects based on NHRC's report in the matter, the law will take its course.

"After May 2, 45 people from Bengal were murdered, women were raped, around 25,000 people are homeless. Mamata Banerjee is not a political leader, she is cruel...What happened in Bengal after May 2 is similar to the Calcutta killings of 1946," he said.

Adhikari informed the BJP, across the state and country virtually participated in a protest against Mamata Banerjee and violence in West Bengal under the clarion call of "Save Bengal Save Democracy" to pay homage to "Martyers' families".

The BJP's West Bengal chief, who was in Delhi today, also attacked Banerjee over post-poll violence and compared the Trinamool chief to Muhammad Ali Jinnah, who was the first Governor-General of Pakistan.

Ghosh noted that before Independence, the Calcutta killings of 1946 happened on August 16, the day on which Banerjee called for the celebration of 'Khela Diwas' to celebrate her victory in Assembly polls.

"Motive behind 'Khela Diwas' is clear. Before Independence, Calcutta killings happened on August 16 and around 20,000 people were killed in Bengal in communal violence on Jinnah's call. Mamata Banerjee is following that to turn Bengal into Bangladesh," Ghosh said.

"More than 12,000 violent incidents happened and our 45 workers were killed in post-poll violence in Bengal. If she wants to take this 'Khela' to the whole country, I don't think the country will accept that," he added.

Earlier today, going back to her clarion call of 'Khela Hobe' (Game is on), Banerjee said, "'Khela' will happen in all states until BJP is removed from the country. We wll celebrate 'Khela Diwas' on August 16. We will give footballs to poor children. Today, our freedom is at stake. BJP has endangered our liberty. They don't trust their own ministers and misuse agencies."

She 'congratulated' the people of West Bengal for voting for her party, and said, "We fought against money, muscle, mafia power, and all agencies. Despite all odds, we won because people in Bengal voted for us and we received blessings from people in the country, world."

Targeting the Trinamool Congress, Ghosh stated that the party has taken the atmosphere of violence to such an extent that is beyond imagination in a democracy.

Ghosh added, "We are protesting to put an end to the atmosphere of violence in politics in West Bengal."

The National Human Rights Commission on July 15 submitted a report on the West Bengal post-poll violence to the Calcutta High Court. In the report, the committee said, "This was retributive violence by supporters of the ruling party against supporters of the main opposition party." (ANI)