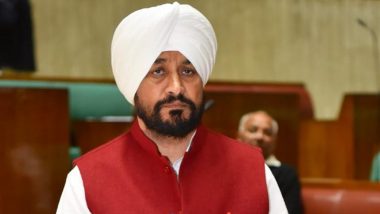 He said the initiative would go a long way to streamline the existing procedure of 'girdawari and jamabandi' that will protect the people from sheer exploitation through illegal practices to divest them from their proprietary rights. Also Read | Uttar Pradesh Assembly Elections 2022: RLD Chief Jayant Chaudhary Rules Out Alliance With Congress.

Giving a stern warning to the deputy commissioners to stamp out corruption from public life, Channi categorically said it has to be eradicated without showing any complacency. Also Read | Delhi Police Arrests 2 People for Kidnap and Murder of 9-Year-Old Boy in Uttam Nagar.

The chief minister asked the DCs to ensure their punctuality in offices from 9 am and even work beyond 5 pm to effectively deliver the goods to the satisfaction of the public.

He exhorted them to ensure prompt redressal of public grievances and keep their meetings with field officers after 5 pm so that they could exclusively concentrate on the administrative functioning and reserve any two days in a week for field visits to supervise the ongoing development activities.

Attributing clean, responsive and transparent administration as the hallmark of his government, Channi asked the deputy commissioners to organise 'suwidha camps' to clear the backlog of social security pensions.

He also directed them to hold these camps on October 20 and 21 besides October 29 and 30 at tehsil, block and district level, a statement said. To speed up the ongoing development work and welfare schemes, the chief minister instructed the DCs to have meetings with the MLAs to redress their various concerns related to their respective constituencies on priority.

Coming down heavily on the prevailing system of "corruption", especially in the registry offices, Channi asked the DCs not to allow tehsildars to undertake registration beyond office hours after 5 pm.

The DCs would have to ensure that people are not forced to give bribes for getting their work done like approval of building plans of their houses, driving and arms licenses from the field offices. He asked them to put in place a mechanism to check corruption with a heavy hand to ensure clean, responsive and transparent governance.