In a strong disapproval Digvijaya Singh's remarks on surgical strikes, former Congress chief Rahul Gandhi on Tuesday said the party leader had stated a "ridiculous thing" and that he disagrees with the views. 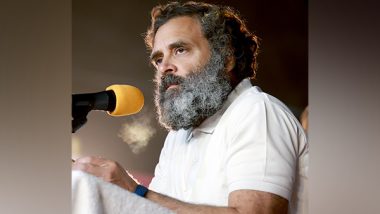 New Delhi, January 24: In a strong disapproval Digvijaya Singh's remarks on surgical strikes, former Congress chief Rahul Gandhi on Tuesday said the party leader had stated a "ridiculous thing" and that he disagrees with the views.

The BJP continued its strong attack on the Congress over Digvijaya Singh's remarks with Madhya Pradesh Chief Minister Shivraj Singh Chouhan alleging that "Congress' DNA is in favour of Pakistan" and "it's an attempt to demoralize the Army". Rahul Gandhi on Digvijaya Singh's Remarks on Surgical Strikes, Says 'Armed Forces Need Not Show Proof'.

"I do not agree to what Digvijaya Singh said. We have full trust on our Army. If Army takes action, there is no need of proof. I personally disagree with his statement and Congress official position is also that this is his personal opinion," Gandhi said.

Digvijaya Singh had said the government talks of surgical strikes. "They claim to have killed so many people but no proof is given," he had said. The party had officially distanced itself from Digvijaya Singh's remarks on Monday.

Asked why action has not been taken against Digvijaya Singh, a former Madhya Pradesh Chief Minister, Rahul Gandhi said Congress is a democratic party and not a dictatorship.

"I would like to assure you that Digvijaya Singh's views are outlying views. They are not views that are held by the centre of the party. We are absolutely crystal clear that the armed forces do a job. They do a job exceptionally well and they do not need to be providing proof for anything," Gandhi said. He alleged that there is no conversation in BJP and RSS.

"It is in the culture of our party to allow conversations and sometimes, when those conversations happen, people who have extreme views, air their views. So, we try to manage a conversation. In the BJP and in the RSS, there is no conversation. They just decide that this is what is going to be and nobody can talk after this. It is like demonetisation. The Prime Minister gets up one morning and says- we are going to demonetise or like GST, where, you know, you completely destroy the backbone of the country, because you are not having a conversation," Gandhi said.

"So, we think, a conversation is very-very important and sometimes, of course, there are people in every conversation, who will say ridiculous things and in this case, I am sorry to have to say this about a senior leader, he said a ridiculous thing," the Congress leader added.

BJP leaders alleged that Digvijaya Singh had sought to demoralise the soldiers. "The DNA of the Congress is in favour of Pakistan. Sometimes they (Congress) ask for proof of surgical strike and at times proof of the existence of Ram. And now again Digvijaya Singh asks for proof of surgical strike while walking in Bharat Jodo Yatra. Singh is doing a sin of demoralising the soldiers. He is showing that he is standing with Pakistan," Chouhan told reporters in Bhopal.

BJP leader Ravi Shankar Prasad said that for the first time Rahul Gandhi said that he has respect for the Army, and asked if he was not able to make Digvijaya Singh understand this in the 1000s of km of Bharat Jodo Yatra.

"Rahul Gandhi said for the first time that they respect the Army. Digvijaya Singh has been walking 1000s of km with you from Kanyakumari. Weren't you able to make him understand this? Is it for the first time that he has said such a thing? When you said such a thing, you have given rise to some other questions. The BJP is going to settle the final account with you, as far as your vacillating stand on the Armed Forces is concerned. We have to remind Rahul Gandhi of his previous comments and ask if he would retreat them as well?" Prasad said at a press conference here.

Rahul Gandhi also hit back at Shivraj Singh Chouhan's remarks. "Congress gave freedom to the country, it created the institutions, the country has been created by Congress philosophy. We fought the Britishers, people of BJP and RSS stood with them and their ideology and their leaders gave the two-nation concept," Gandhi said. .

Digvijaya Singh's remarks had also drawn criticism from retired defence personnel. Wing Commander Praful Bakshi (retd) said that the Indian Army is not bound to give proof about the surgical strikes it conducted along LoC in 2016.

"The Army does not give any proof. What proof should it give and why? If you want to know, ask the Pakistanis. If they are your friends, they will tell you, if not, they won't. Nobody can compel the Army to give proof. If the government wants to give proof, it can. But the government also knows that it would be against the policy of the Army. The Pakistanis levelled the place where the attack took place. It does not matter who says what. I think it is not even a question. The media should not react to this," he had said.