A rickshaw-puller died at the civic-run Hindu Rao Hospital here during treatment on Friday, following which some of his kin allegedly vandalised properties in the emergency department, police and facility's resident doctors' association said. 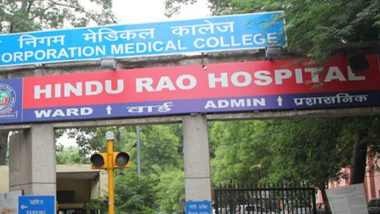 New Delhi, March 12: A rickshaw-puller died at the civic-run Hindu Rao Hospital here during treatment on Friday, following which some of his kin allegedly vandalised properties in the emergency department, police and facility's resident doctors' association said.

"Information was received at the Sabzi Mandi police station, regarding a quarrel that had broken out at Bara Hindu Rao Hospital. After reaching the spot, it was found that one rickshaw-puller, Sonu (34), a resident of Kabir Basti, admitted in the hospital on Friday around 10 am, had died during the treatment, following which his family members have damaged the hospital property," a senior police officer said.

The RDA also circulated a video, purportedly of the incident in which a group of people could be seen "smashing glass panes" amid a commotion. "It happened in the emergency department and doctors were running scared. One doctor received injury in hand, and another was hit in the eye," Sardana claimed.

"We have demanded that an institutional complaint be sent to police to lodge an FIR, till that time, we resident doctors won't attend to ER services. Meanwhile, the RDA has lodged a complaint with the police," he said. He said the angry family members of the patient were shouting and falsely blaming the doctors for his unfortunate death.

The senior police officer late night said while a formal complaint has been received from the family members of the deceased man, alleging "carelessness" on part of hospital authorities, "no formal complaint has come from the doctors or hospital's side as of now". Hindu Rao Hospital, run by the North Delhi Municipal Corporation is the largest civic-run facility in the national capital.