Get latest articles and stories on India at LatestLY. Several people have been feared washed away in flash floods caused by a cloud burst that wreaked havoc at Choj nullah in Parvati Valley of Himachal Pradesh's Kullu district this morning. 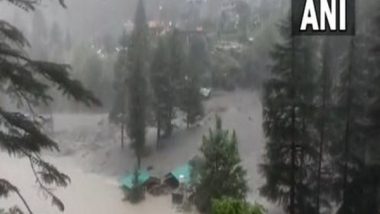 The incident has caused considerable damage to the properties and also destroyed the only bridge that leads to the village.

As many as four people are missing, added the police. He also said that the police and rescue teams are on the spot. "At Chojh village, 4-6 persons and 5 cattle heads are feared washed away. Another landslide occurred on Kasol-Jaimala Road," added State Emergency Operation Centre in its bulletin.

At Malana Project & II Tehsil Bhuntar of Kullu, a building of the Project has been damaged. In the incident, 25 to 30 employees were stuck in the building. They have been rescued. The SDM Kullu, police and fire team carried out the rescue operation.