Days after the formation of the Eknath Shinde-led government in Maharashtra, Shiv Sena leader Sanjay Raut on Tuesday said that the party is "still hopeful" of the rebel MLAs' returning to former chief minister Uddhav Thackeray's side. 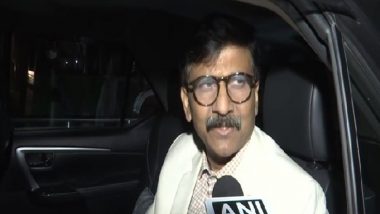 Mumbai, July 5: Days after the formation of the Eknath Shinde-led government in Maharashtra, Shiv Sena leader Sanjay Raut on Tuesday said that the party is "still hopeful" of the rebel MLAs' returning to former chief minister Uddhav Thackeray's side.

The leader said that they were "always in talks" with the rebels and exuded confidence that they "will come back". The remarks of Raut came a day after the new government won the trust vote on the Floor of the House. Uddhav-Led Shiv Sena Will Win Over 100 Seats If Mid-Term Polls Are Held in Maharashtra, Says Sanjay Raut.

"We are still hopeful that these MLAs will return... We were always in talks with rebels... They are our people, will come back. 'Subha ka bhoola agar shaam ko ghar aa jaye to usse bhoola nahi kehte'," said Raut while addressing a press conference.

Shiv Sena, whose MLAs revolted and switched to the Shinde faction recently ending up overthrowing the Uddhav Thackeray government in the state, exuded confidence in winning 100 seats as Shiv Sena in the Assembly polls.

"We are confident of winning 100 seats as Shivsena... Uddhav Thackeray had said let's have mid-term polls and everything will be clear.. who will win and who will lose," Raut said.'

Meanwhile, Maharashtra Chief Minister Eknath Shinde on Monday hit back at Nationalist Congress Party (NCP) chief Sharad Pawar who raised doubts over the survival of the Shinde-Fadnavis government and asserted that his government will complete his term, adding that the alliance will win 200 seats in the next Assembly polls. He further added, "We will see about the cabinet expansion," when asked about the cabinet expansion.

"Sharad Pawar is a big leader, but whatever he says is just the opposite of fact. So we will complete 2.5yrs of governance; next time, we'll have 200 MLAs, 100 ours and 100 BJP's," Shinde said at a press conference soon after winning the crucial floor test in the state Assembly on the last day of the two-day special session of the House.

He also said that in the next Assembly polls, his alliance with BJP will win with 200 MLAs. Shinde on Thursday took oath as the new Chief Minister of

Maharashtra. Along with him, Devendra Fadnavis also took an oath as deputy chief minister of the state. Both the leaders were administered the oath of service by Governor Bhagat Singh Koshyari. However, no other cabinet member took oath on that day.