The Deputy Director of Pathani Samanta Planetarium, Bhubaneswar, S Pattnaik on Friday said that the solar eclipse on June 21 will be an annular eclipse. 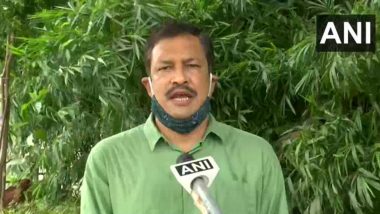 Bhubaneswar, June 20: The Deputy Director of Pathani Samanta Planetarium, Bhubaneswar, S Pattnaik on Friday said that the solar eclipse on June 21 will be an annular eclipse.

"Solar eclipse on June 21 will be an annular eclipse. It will be visible to entire India as partial eclipse and as an annular eclipse to three states, including Himachal Pradesh, Uttarakhand, and Haryana. It will start at around 10:20 a.m. and end around 2:20 p.m.," he said.

Also Read | UP Police Stops Group of Kids in Aligarh Who 'Wanted to Go to China Border' to Avenge Killing of Indian Soldiers; Watch Video.

Pattnaik said that there will be no special arrangements in the Planetarium, and an online program will be organised for the people so that they can see it since it would be difficult to maintain social distancing due to large gatherings. Solar Eclipse 2020 Date, Time and Place: Annular Solar Eclipse on June 21, Check Names of Countries Where Surya Grahan Will Be Visible.

"As per the forecast, the chances to see it in Odisha are less than one percent, and chances to see it will be less across India as the weather is cloudy, but one can see it wherever clouds are clear," he added.

He further said that in order to see a solar eclipse, people should take proper protection. "We are also taking classes in various schools on how to see it and what to do."

Pattnaik informed that there are three types of solar eclipses, including total, partial, and annular. "This eclipse will be visible in parts of Africa, Asia, Europe, and this eclipse will not be seen for 100 years in India only."