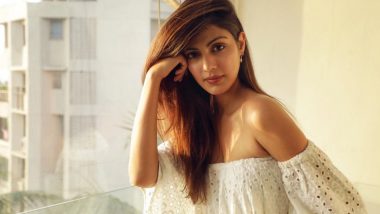 In the petition, Chakraborty alleged that there cannot be an "impartial investigation" in Bihar for the case and hence, she sought transfer of probe in the FIR to Mumbai. Also Read | Congress MLAs Shifted to Jaisalmer To 'Keep External Pressure Away', Says Rajasthan CM Ashok Gehlot.

"In Bihar, there cannot be an impartial investigation and thereby she seeks transfer of probe in the FIR registered in Bihar to Mumbai... It would be just expedient if the transfer of the case is directed from Patna to Mumbai," she stated in her petition.

Bihar Police started the investigation in the case after an FIR was registered by Rajput's father KK Singh in Patna against Chakraborty under several sections including abetment of suicide. Also Read | Locust Attack in India: Immature Pink Tiddi Dal Swarms, Adult Yellow Hoppers Active in Several Districts of Rajasthan, Haryana and Gujarat.

She also claimed that Rajput was suffering from "depression from some time and was also on "anti-depressants". Chakraborty had received various death and rape threats and she is in deep trauma due to Rajput's demise which has multiplied further due to the media sensitivity regarding the case, read the petition.

The actor further claimed that she had also filed a complaint at Mumbai's Santa Cruz police station against the death and rape threats. Earlier, Chakraborty had demanded a CBI probe in the case.

The Bihar government and Rajput's family have filed caveats before the Supreme Court on Thursday seeking to challenge Chakraborty's petition. In a video statement released by her lawyers today, Chakraborty said that she has faith in the judiciary and she will get justice.

"I have immense faith in God and the judiciary. I believe that I will get justice. Even though horrible things are being said about me in the electronic media. I refrain from commenting on the advice of my lawyers as the matter is sub judice. Satyamev Jayate. The truth shall prevail," she said in the video statement.

Rajput was found dead in his Mumbai residence on June 14. According to the Mumbai Police, statements of 41 people, including filmmaker Mahesh Bhatt, film critic Rajeev Masand, director-producer Sanjay Leela Bhansali, and filmmaker Aditya Chopra have been recorded in the investigation so far.