Travellers visiting the state after generating an e-pass allow the government to trace them or their contacts if they had tested Covid-19 positive during their stay in Tamil Nadu. 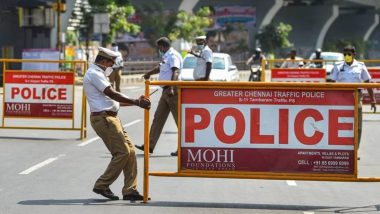 Chennai, March 7: Tamil Nadu has made it mandatory for overseas and domestic passengers, except those from Karnataka, Andhra Pradesh and the neighbouring Puducherry union territory to have an e-pass to be allowed entry into the state.

The move comes in the wake of a spurt in coronavirus cases in states like Maharashtra and Kerala, even as Tamil Nadu has been witnessing an increase in the number of new infections over the past few days.

A Government Order to this effect was issued recently by the Health and Family Welfare Department. Travellers visiting the state after generating an e-pass allow the government to trace them or their contacts if they had tested Covid-19 positive during their stay in Tamil Nadu. India Reports Single-Day Spike of 18,711 New COVID-19 Cases, Highest in Six Weeks; Coronavirus Tally Crosses 1.12 Crore-Mark.

According to the G.O dated March 4, an auto e-pass is mandatory for all international and domestic passengers from other states and union territories.

However, those from Karnataka, Andhra Pradesh and Puducherry were exempted.

Last year, in view of the COVID-19 pandemic, the Tamil Nadu government had allowed only those with an e-pass to take up inter-district and inter-state travel, though the norms were relaxed later.

State Health Secretary J Radhakrishnan recently expressed concern over laxity in wearing of masks among people and the trend of formation of COVID-19 clusters after people attended weddings or funerals. On Sunday, Tamil Nadu continued to witness an upward trend in its daily tally with 567 new cases being reported, pushing the gross to 8.55 lakh.