India News | Will Hold Our Own Parliament Sessions at Jantar Mantar: Rakesh Tikait Ahead Protest 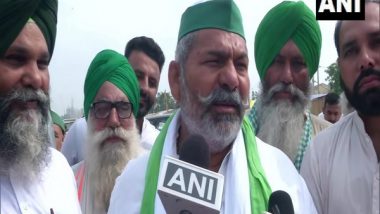 New Delhi [india], July 22 (ANI): While the Monsoon Session of Parliament is on, the farmers' protest led by Bharatiya Kisan Union (BKU) leader Rakesh Tikait is going to take place against the Centre's new farm laws just at a short distance away. BKU leader Rakesh Tikait on Wednesday said that the farmers will hold their own parliament sessions at Jantar Mantar.

While speaking to ANI, Rakesh Tikait said, "Parliament is just 150 metres away from Jantar Mantar. We will hold our own Parliament sessions there.

On being asked about arrangements to tackle situations like January 26 Red Fort violence Tikait said, "What do we have to do with hooliganism? Are we miscreants?"

Meanwhile, heavy security is being deployed at the Singhu border and Tikri Border in view of farmers' protests against Jantar Mantar amid the monsoon session of Parliament.

Farmers have been permitted to protest at Jantar Mantar with limited numbers not exceeding 200 persons for Samyukt Kisan Morcha (SKM) and six persons for Kisan Mazdoor Sangharsh Committee (KMSC) from 11 am to 5 pm daily.

Farmers have been protesting on the different borders of the national capital since November 26 last year against the three newly enacted farm laws. So far, several rounds of talks have been held between the Centre and farmer leaders to break the deadlock between the two parties. (ANI)