Hindu Mahasabha on Tuesday said it will rename Meerut as Nathuram Godse Nagar if its candidate is elected the mayor in the upcoming municipal polls. 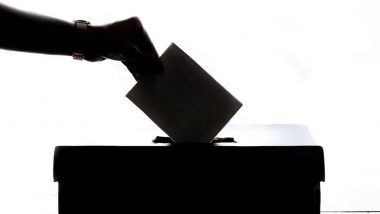 Meerut, Nov 22: Hindu Mahasabha on Tuesday said it will rename Meerut as Nathuram Godse Nagar if its candidate is elected the mayor in the upcoming municipal polls.

Islamic names of various places will be also changed to those of great Hindu men, it said. Gujarat Assembly Elections 2022: From Rivaba Jadeja to Paresh Dhannai and Isudan Gadhvi, List of Key Candidates and Constituencies Going to Polls in First Phase.

The right-wing organisation also released its manifesto, which said its first priority will be to make India a "Hindu Rashtra" and next is to protect "Gau Mata". Taking a dig at the BJP and Shiv Sena, it said they were moving away from their ideology as there was an increased influx of people from other communities in the two parties.

"If Hindu Mahasabha gets enough number of councillors and wins the mayor's post, the name of Meerut will be changed to Nathuram Godse Nagar and Islamic names of different places in the city and the district will be named after Hindu great men," national vice president of the organisation Pandit Ashok Sharma said.

Abhishek Agarwal, Hindu Mahasabha's new chief of Meerut district for the urban body elections, said the organisation will contest in all the wards.

He said "patriotic" candidates will be identified and they will have to give an undertaking that they will be committed to furthering the organisation's ambitions. Leopard Allegedly Spotted on IIT-Bombay Campus, Forest Department Alerted.

Announcing its manifesto, Agarwal said, "The first promise is to make India a 'Hindu Rashtra' and the second task is to ensure that every Hindu takes care of Gau Mata." The organisation will also work on stopping religious conversions and growing "Islamic appeasement politics", he added.

"The BJP used to call itself a Hindu party, but today it is also increasingly dominated by people from other communities. In the same way, Shiv Sena is also moving towards Islamic appeasement politics," he claimed.

The urban body polls across Uttar Pradesh are expected to be held in December.