Days after Britney made an emotional plea to a Los Angeles judge to terminate her conservatorship, her younger sister Jamie said. 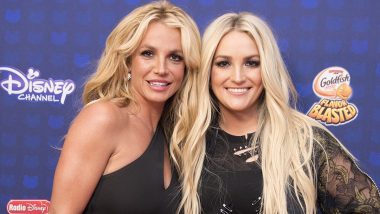 Singer-actor Jamie Lynn Spears has broken her silence, speaking in support of her sister Britney Spears, following the star's shocking testimony amid her conservatorship battle. Days after Britney made an emotional plea to a Los Angeles judge to terminate her conservatorship, her younger sister Jamie said that she wants nothing but happiness for her sister and that she always has and "always will" support Britney. Christina Aguilera Says Britney Spears ‘Deserves All of the Freedom Possible’ Amid Her Conservatorship Battle.

In a series of videos posted on her Instagram Stories on Monday, the 30-year-old actor addressed her sister's explosive testimony and plea to end her conservatorship after more than a decade. "I just want to take a second to address a few things," Jamie Lynn began. "The only reason I haven't before is because I felt like until my sister is able to speak for herself and say what she felt she needed to say publicly, that it wasn't my place or it wasn't the right thing to do. Now that she has very clearly spoken and said what she needed, I feel like I can follow her lead and say what I feel I need to say," she added. Rhea Chakraborty Comes Out in Support of Britney Spears Amid Singer’s Conservatorship Hearing.

The star continued by saying she has "loved, adored and supported" Britney since the day she was born. And although she may not have been vocal in the past, Jamie Lynn assured fans she was supportive of her older sister behind closed doors. "I don't care if she wants to run off to the rainforest and have a gazillion babies in the middle of nowhere or if she wants to come back and dominate the world the way she has so many times before," she explained.

She added, "I have nothing to gain or lose either way. This situation does not affect me either way because I am only her sister who is only concerned about her happiness."

Wiping tears off her face, Spears said that her only role in the pop star's life is to be a supportive sister and aunt to her children. "I have made a very conscious choice to only participate in her life as her sister, as an aunt to those boys," she said. "Maybe I didn't support the way the public may have liked me to with a hashtag on a public platform, but I can assure you I have supported my sister long before there was a hashtag and I'll support her long after...note that," she said, referring to the #FreeBritney movement.

At the end of the message, she said, "If ending the conservatorship and flying to Mars or whatever the hell else she wants to do to be happy, I support that 100% because I support my sister. I love my sister. Always have, always will. As long as she's happy. So let's keep praying. That's all." Earlier on Monday, Jamie Lynn's husband Jamie Watson shared his support for his sister-in-law. "I can assure you her family loves her and wants the best for her," Watson told Page Six.

He added, "I wouldn't be around people who weren't. Who wouldn't want to be in support of Britney?" During her testimony last week, Britney, who has been under a court-ordered conservatorship since 2008 with her father, Jamie Spears, addressed the court publicly for the first time, requesting to end her conservatorship. While speaking to the judge, she said that she wanted to sue her family and believes that her conservators should be in jail. She never mentioned her younger sister, Jamie Lynn, when speaking of her family during the hearing, reported Variety.

"I would honestly like to sue my family, to be totally honest with you," the singer told the judge last week. She added, "I also would like to be able to share my story with the world, and what they did to me, instead of it being a hush-hush secret to benefit all of them. I want to be able to be heard on what they did to me by making me keep this in for so long, is not good for my heart. I've been so angry and I cry every day, it concerns me, I'm told I'm not allowed to expose the people who did this to me."

Britney's father has controversially been at the head of the conservatorship since it began in 2008. His attorney has repeatedly said he loves his daughter, but Britney, who pays all of her father's legal fees against her will, per the terms of the conservatorship, described her arrangement to the judge as "abusive." Britney also claimed that she wishes to marry and have a child with Asghari but cannot due to an IUD required by her conservators.

"I would like to progressively move forward and I want to have the real deal. I want to be able to get married and have a baby. I have an [IUD] inside of myself so I don't get pregnant. They don't want me to have children - any more children," Britney alleged. During the hearing, the singer was not questioned by her conservators' lawyers, nor have they had the opportunity to rebut her allegations in court, reported People magazine. As stated by the judge on Wednesday, the singer still needs to file a formal motion to end the conservatorship.