Kourtney Kardashian Poses in a Lingerie After Not Getting Invited at Sisters Kim, Kylie, Kendall's Photo Shoot (See Pic)

American reality TV star Kourtney Kardashian after not being featured in a recent photoshoot with sisters Kendall Jenner, Kylie Jenner, Kim Kardashian, decided to take matters into her own hands -- sharing a mirror selfie on Friday. 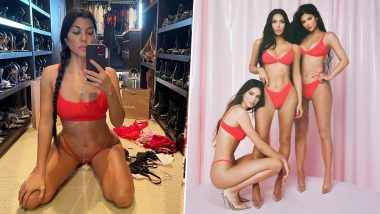 American reality TV star Kourtney Kardashian after not being featured in a recent photoshoot with sisters Kendall Jenner, Kylie Jenner, Kim Kardashian, decided to take matters into her own hands -- sharing a mirror selfie on Friday. The 'Keeping Up With The Kardashians' star took to Instagram and shared a snapshot that sees the 'Poosh' founder posing in red lingerie while sitting inside a walk-in closet adorned with shoes. Kim Kardashian Files for Divorce From Kanye West After 7 Years of Marriage

The picture also sees various pieces of lingerie scattered across the floor. The reality star was also seen rocking a lengthy braid and a skull and bones necklace. The 41-year-old star jokingly wrote on Instagram, "Since I wasn't invited to the sister shoot ..." Kourtney referenced her sisters' photoshoot for Kim's latest 'Skims' line. The shoot notably featured Kim, Kendall, and Kylie all wearing red lingerie for Valentine's Day. Kim Kardashian Won’t Let Her Divorce With Kanye West Come Between His Equation With Their Children

Kourtney fans were quick to shower the mother-of-three with praise and support. "UR THE HOTTEST SISTER QUEEN," one commenter wrote. "You weren't invited because you are the best sister," another user wrote.

"Because they know u stole the show [heart]," said one commenter. Despite not being invited to her family photo shoot, Kourtney is feeling loved in another way.

As reported by Fox News, Kourtney and Blink-182 drummer Travis Barker, seemingly confirmed their relationship on Tuesday with an Instagram post from the 'Poosh' founder. The post featured the two holding hands after Valentine's Day weekend. Furthermore, the couple has received the blessing from their respective families after news of their relationship broke.

Kourtney Kardashian Poses in a Lingerie

Reason Is She Was Not Invited to Sisters Photoshoot

An insider explained to Us Weekly, "They have big modern families [and they] both are dedicated to their kids. They come from these modern families with modern relationships. Both of their families are supportive. It's still very new, but they are both very excited by how easy it all has been."