TMZ reported that La La filed divorce documents on Thursday in New York and cited 'irreconcilable differences' as the reason for separation. 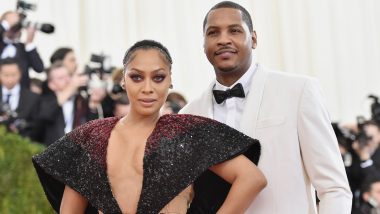 After 11 years of marriage, actor La La Anthony and basketball player Carmelo Anthony have amicably decided to officially call it quits. TMZ reported that La La filed divorce documents on Thursday in New York and cited 'irreconcilable differences' as the reason for separation. Sources close to the former couple told TMZ that "they both wanted to take time to ensure a private and smooth transition in their relationship for their 14-year-old son, Kiyan- who is always their top priority, and they remain fully aligned as parenting partners." Kanye West and Kim Kardashian Agree on Divorce Terms of Having Joint Custody of Their Four Kids.

Things were also not good between the two stars as back in 2017 they parted ways amid rumours that Carmelo cheated on La La, but by late 2018, they worked things out and reconciled. Kelly Clarkson Reveals That She Cannot Imagine Getting Remarried After Divorce.

According to TMZ, in mid-2019, La La reportedly called their marriage "strained" amid "more cheating speculation" and things remained "on shaky ground" even though the family quarantined together in 2020.