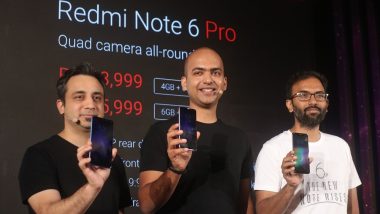 In a tweet on June 24, Jain had said Xiaomi's Redmi Note9 Pro Max was out of stock in less than 50 seconds during a sale. "The Confederation Of All India Traders (CAIT) today came down heavily on Manu Kumar Jain, India Chief of Chinese Smartphone maker Xiaomi for his most insensitive and disrespectful statements deeply hurting the sentiments of millions of Indians for saying that the “Boycott Chinese” sentiment exists only on social media," the traders' body said in a statement. Also Read | Assam State Lottery Results Today: Check Lucky Draw Results of Assam Future Good, Assam Singam Pink, Assam Kuil King on June 27, 2020 Online at assamlotteries.com.

CAIT Secretary General Praveen Khandelwal said the people of India have started to align with the boycott China sentiment on the ground and various celebrities too have joined the movement.