Get latest articles and stories on Lifestyle at LatestLY. One of the key factors that often disheartens women who begin their journey to weight loss is the time it takes for their body to show the results. A recent study has highlighted this issue and the reasons for it. 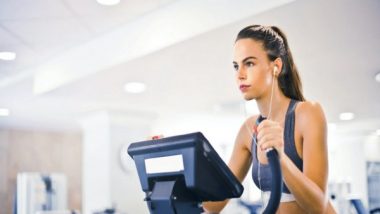 Silver Spring (Maryland) [US], January 27 (ANI): One of the key factors that often disheartens women who begin their journey to weight loss is the time it takes for their body to show the results. A recent study has highlighted this issue and the reasons for it.

The study, published online in 'Obesity', The Obesity Society's flagship journal, said that women who are premenopausal with overweight, metabolic adaptation after a 16 per cent weight loss increases the length of time necessary to achieve weight-loss goals.

Also Read | From Fight Club to Skyfall, 9 Movies That Drastically Changed Themselves for the Chinese Market!.

The present findings represented the first study to examine if metabolic adaptation, at the level of Resting Metabolic Rate (RMR), was associated with time to reach weight-loss goals.

"Healthcare providers involved in obesity management, obesity researchers, individuals with obesity and the general public should pay close attention to these new findings. Delay in achieving weight loss goals, or achieving a weight loss lower than expected, is generally seen as the direct and sole result of reduced adherence to the intervention. This study shows that metabolic adaptation during weight loss is also important in modulating weight loss outcomes and likely to contribute to some of the inter-individual differences seen with weight loss interventions," said Catia Martins, PhD, Department of Nutrition Sciences, University of Alabama at Birmingham and the corresponding author of the study.

The existence or lack of, and clinical relevance of metabolic adaptation in response to weight loss, has been one of the most controversial issues in the obesity field. A review of the literature suggested that differences among studies derive from inconsistencies related to the status of energy balance and/or weight stability of the participants when measurements are taken. The aim of this retrospective analysis was to determine if metabolic adaptation, at the level of RMR, was associated with time to reach weight loss goals after adjusting for adherence to the diet in a population of premenopausal women with overweight.

A total of 65 White and Black premenopausal women aged 21 to 41 years old with overweight were selected for the study. The participants were sedentary (no more than one time per week of regular exercise), had normal glucose levels, a family history of overweight/obesity in at least one, first degree relative, and no use of medications that affect body composition or metabolism. All participants were non-smokers and reported a regular menstrual cycle.

For the present study, researchers included all participants from the ROMEO study and the participants randomized to diet only from the JULIET study. All participants were provided an 800-kcal diet until reaching a BMI of greater than or equal to 25 kg/m2. After a four-week weight stabilization period at baseline and after weight loss, testing was conducted in the follicular phase of the participants' menstrual cycle in a fasted-state during a four-day, in-patient stay.

The results revealed that the participants lost an average of 16 per cent of their weight over an average of 5 months. Average dietary adherence was approximately 64 per cent. There was a significant metabolic adaptation after weight loss (average 46 kcal/day) and this variable was a significant predictor of time to reach weight-loss goals even after adjusting for confounders (R2 adjusted = 0.63, p < 0.001).

"Results of this investigation provide further evidence of the ways that physiology fights back when people are trying to lose weight," said David B. Sarwer, PhD, director of the Center for Obesity Research and Education at the College of Public Health at Temple University in Philadelphia, Pa. "A countless number of environmental variables and other social determinants of health also make weight loss and maintenance challenging for many individuals. Nevertheless, it is import to remember that even a modest weight loss of five percent of initial body weight--much smaller than seen in this study--is associated with clinically significant improvements in weight-related health issues for many individuals," said Sarwer, who was not affiliated with the study. (ANI)