Goa Assembly Elections 2022: From Pramod Sawant to Amit Palekar, A Look At Probable CM Candidates in The State

With the state witnessing a new political drama each passing day, the possibility of a multi-cornered contest across the state looks certain 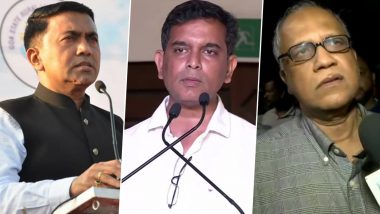 The dates for the Goa assembly elections have been announced. The state will go to polls in one phase on February 14 and the results will be declared on March 10. Goa has 40 assembly seats. At present, there is a BJP government in Goa. It has 25 MLAs of its own and the support of an independent. Recently, two BJP MLAs Carlos Almedia and Elina Saldana resigned from the party.

Notably, while the BJP is the ruling party in Goa, in opposition are Goa Forward Party, Maharashtrawadi Gomantak Party, Congress, and debutant Aam Aadmi Party (AAP) as well as the Trinamool Congress.  Goa Assembly Elections 2022: A Look Back at The Polling, Alliances And Results of 2017 Election Ahead of Vidhan Sabha Polls

With not much time left for the polls, These seem to be the probable chief ministerial candidates for Goa

Incumbent Chief Minister Pramod Sawant assumed the top political mantle despite never having served as a minister in the state cabinet.

Much like Sawant's mentor and immediate predecessor late Chief Minister Manohar Parrikar, who was sworn in as Chief Minister in 2000, without every having served as a minister in the state cabinet. Sawant holds a Bachelor's degree in Ayurvedic Medicine from the Ganga Ayurvedic Medical College in Maharashtra's Kolhapur district and has practiced as a doctor of alternative medicine in Goa. He has completed his Masters in Social Welfare from the Tilak Maharashtra Vidyapeeth, a deemed university in Pune.

Sawant has been elected to the state assembly on two occasions in 2012 and 2017 from the Sanquelim assembly constituency. Sawant, a Maratha by caste, served as a Speaker of the state legislative assembly from 2017. He rose up in the ranks in the Bharatiya Janata Party (BJP) through the party's youth brigade and was one of the younger BJP leaders who was considered close to Parrikar.

Amit Palekar is a lawyer and social worker, who has now been declared as the CM candidate for AAP. Palekar, who belongs to the OBC Bhandari community of Goa has been a familiar face among the people of Goa due to his continued protests. The lawyer turned politician was recently in news for holding a hunger strike against the illegal construction at an Old heritage site in the coastal state.

Palekar, who joined the AAP in October 2021, was introduced by Kejriwal as an 'honest man' worthy of the CM chair. Kejriwal, while making the announcement at a press briefing in Panaji also said that the party had chosen Palekar, as he was well known for his welfare work in the community.

Moreover, the Bhandari community account for about 35 per cent of Goa's population, which also comes in handy for AAP. The party has been running a strong election campaign in the poll-bound state so far and is looking to dethrone the ruling BJP.

A legislator since 1994, the major part of Digambar Kamat's political career was with the Bhartiya Janata Party (BJP). Before assuming the reins of the state as the chief minister in 2007, Kamat was the minister for power, mines, art and culture in the Pratapsing Rane-led Congress government. In the year 1994, he quit the Congress to join BJP. Here, the 61-year old politician is believed to have played a key role engineering the collapse of the Manohar Parikkar-led BJP government in 2005 only to go back to the Congress party.   Goa Assembly Elections 2022: Congress Ready to Take Support of Any Party Willing to Defeat BJP, Says P Chidambaram

Kamat, a real estate developer, is credited with being an efficient administrator when he was the state power minister for three consecutive terms. Besides power, he also headed portfolios of urban development and mines, and town and country planning.

After the 2007 elections, Kamat's name for the post of chief minister was a compromise choice following a battle for supremacy between then state Congress chief, Ravi Naik, and Rane, the outgoing chief minister.

(The above story first appeared on LatestLY on Jan 27, 2022 04:27 PM IST. For more news and updates on politics, world, sports, entertainment and lifestyle, log on to our website latestly.com).