While the Aam Aadmi Party (AAP) has crossed the majority mark of 126, the BJP has won 99, according to the latest State Election Commission figures. The Congress was lagging far behind, winning just seven seats. 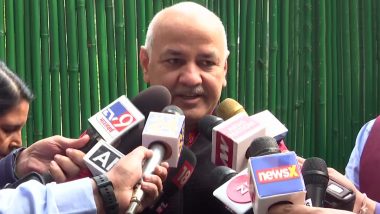 New Delhi, December 7: Senior AAP leader Manish Sisodia on Wednesday thanked the people of Delhi for voting his party to victory in the MCD polls and said it was their mandate that helped it defeat the "world's biggest and most negative party".

Of the 250 wards under the Municipal Corporation of Delhi (MCD), the AAP has won 131 seats and was ahead in three. The BJP, which exit polls predicted would suffer a massive defeat, put up a spirited fight and is leading in four, numbers available at 2 pm showed. Delhi MCD Election Result 2022 Ward-Wise Full List of Winners: Names Of Winning Candidates of BJP, AAP and Congress in Municipal Corporation Polls.

"Heartfelt gratitude to the people of Delhi for trusting Aam Aadmi Party in Delhi MCD… By defeating the world's biggest and most negative party, the people of Delhi have made a hardcore honest and working @ArvindKejriwalji win," Sisodia said in a tweet in Hindi, targeting the BJP. "For us, this is not just a victory, it is a big responsibility," he said.

Delhi Chief Minister Arvind Kejriwal is expected to address people after the results. The high-stakes election was held on December 4, sealing the electoral fate of 1,349 candidates in voting machines. A voter turnout of 50.48 per cent was registered in the elections. The results of this election may have ramifications beyond the national capital.