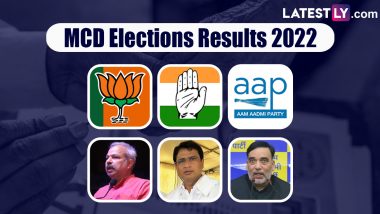 The BJP, which had been governing the MCD since 2007, and the AAP had nominated candidates in all 250 wards. The Congress party contested polls in 247 wards. In 2017, the BJP had won 181 of the 270 wards. The AAP had bagged 48 seats, whereas Congress candidates were elected from 27 wards. Polling was not held for two seats due to the death of candidates. The number of wards has now been decreased from 272 to 250 following the delimitation exercise. MCD Election Results 2022 Live Streaming on ABP News: Watch Live News Updates on Counting of Votes for Delhi Municipal Corporation Polls.

(The above story first appeared on LatestLY on Dec 07, 2022 08:22 AM IST. For more news and updates on politics, world, sports, entertainment and lifestyle, log on to our website latestly.com).