Get latest articles and stories on Entertainment at LatestLY. Joining a growing chorus of celebrities this week in speaking out against DaBaby's homophobic remarks, singer-songwriter Miley Cyrus invited the rapper to have an open dialogue with her on the subject. 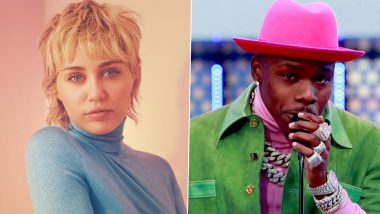 Joining a growing chorus of celebrities this week in speaking out against DaBaby's homophobic remarks, singer-songwriter Miley Cyrus invited the rapper to have an open dialogue with her on the subject. In a statement posted on her Instagram handle, Miley spoke out against cancel culture and in the caption wrote, "@DaBaby check your DMS -- would love to talk and see how we can learn from each other and help be part of making a more just and understanding future!" Also Read | Tokyo Olympics 2020: From Shah Rukh Khan to Akshay Kumar, Celebs Laud Men’s Hockey Team For Historic Bronze Win After 41 Years.

In her social media statement, Miley wrote, "As a proud and loyal member of the LGBTQIA+ community, much of my life has been dedicated to encouraging love, acceptance, and open mindedness. The internet can fuel a lot of hate and anger and is the nucleus of cancel culture... but I believe it can also be a place filled with education, conversation, communication and connection." The 'Wrecking Ball' singer, in her statement, further said, "It's easier to cancel someone than to find forgiveness and compassion in ourselves or take the time to change hearts and minds. There's no more room for division if we want to keep seeing progress! Knowledge is power! I know I still have so much to learn." Also Read | Suriya Inks Four Film Deal With Amazon Prime Video.

During DaBaby's recent Rolling Loud performance on June 25, the rapper had encouraged the audience to put their cell phone flashlights in the air if they "didn't show up today with HIV/AIDS or any of them deadly sexually transmitted diseases that will make you die in two to three weeks," among further derogatory remarks about HIV/AIDS and LGBTQ+ people. After receiving social media backlash, DaBaby was pulled from his brand ambassador deal with Boohoo Man. His 'Levitating' collaborator, Dua Lipa, also spoke out against him, along with other big names including Elton John, Madonna and others.

Just three days after the incident, DaBaby released a video for his new song, 'Giving What It's Supposed To Give', which featured the lyrics, 'We like AIDS... we on your ass, bitch, we won't go away'. The day of his scheduled Sunday performance at Lollapalooza, the festival announced in a tweet that DaBaby would no longer be performing. "Lollapalooza was founded on diversity, inclusivity, respect, and love. With that in mind, DaBaby will no longer be performing at Grant Park tonight," the statement read.

He has also been dropped from other festivals, including Austin City Limits, Governor's Ball, Day N Vegas, iHeartRadio Music Festival, Can't Wait Live!, Music Midtown and Parklife Festival. In an initial apology that came across as insincere to several fans, DaBaby admitted on Twitter that his remarks were "insensitive" but suggested that the comments had been "digested" wrong in another tweet. The rapper followed up with statements like "Apologies for being me."

Once again on August 2, DaBaby offered another apology on Instagram, writing, "Social media moves so fast that people want to demolish you before you even have the opportunity to grow, educate, and learn from your mistakes. As a man who has had to make his own way from very difficult circumstances, having people I know publicly working against me -- knowing that what I needed was education on these topics and guidance -- has been challenging."

Expressing gratitude towards the people, who reached out to him, he added, "I appreciate the many people who came to me with kindness, who reached out to me privately to offer wisdom, education, and resources. That's what I needed and it was received." DaBaby is no stranger to controversy, having to backtrack some questionable lyrics about JoJo Siwa earlier this year. He also came under fire from Megan Thee Stallion recently, following his collaboration with Tory Lanez, who allegedly shot her in the feet last summer. Lanez joined DaBaby at Rolling Loud to perform their track 'SKAT' immediately after Megan hit the stage.