Billed as an untold story about a journey of a mother's battle against an entire country, the movie will be directed by Ashima Chibber 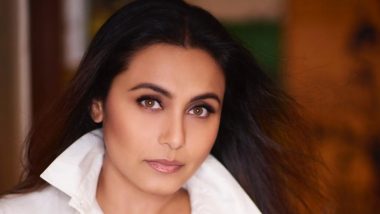 Production houses Zee Studios and Emmay Entertainment have come together for actor Rani Mukerji's next feature film, Mrs Chatterjee vs Norway. Billed as an untold story about a journey of a mother's battle against an entire country, the movie will be directed by Ashima Chibber, known for "Mere Dad Ki Maruti". Mukerji, who turned 42 on Sunday, said the announcement has made her birthday special. The actor said "Mrs Chatterjee vs Norway" is one of the most "significant films" of her career spanning 25 years. She made her debut with the 1996 drama "Raja Ki Aayegi Baraat". Rani Mukerji Birthday Special: From Traditional Drapes to Modern Cuts, She Believes in Acing Them All (View Pics).

"I started my career with 'Raja Ki Aayegi Baraat', which was a woman-centric film, and coincidentally in my 25th year, I'm announcing a film that is also centered around a woman's resolve to fight against all odds and take on a country. "'Mrs Chatterjee vs Norway' is a story of true human resilience and it is a film that is dedicated to all the mothers out there. It is truly one of the most amazing scripts that I have read in a long time and I immediately decided to do this special film," Mukerji said in a statement. Rani Mukerji Birthday: Black, No One Killed Jessica, Mardaani 2 – 8 Stellar Performances of the Superstar That Deserve Perennial Applause!

The actor was last seen on the big screen in the 2019 action drama "Mardaani 2" and is gearing up for the release of "Bunty Aur Babli 2" next month. Mukerji said she is thrilled to collaborate with filmmaker Nikkhil Advani of Emmay Entertainment, who she has known since her breakthrough "Kuch Kuch Hota Hai" (1998) on which he served as an assistant director to then debutant director Karan Johar. "I am happy that Zee Studios has collaborated with them on this powerful script. To partner with Ashima Chibber, my director, is something I am looking forward to, whose vision for the film and intent with this project has truly bowled me over," she added.

Inspired by a true story, the film will mark Mukerji's first collaboration with Monisha Advani, Madhu Bhojwani (Emmay Entertainment) and Zee Studios. Monisha Advani, partner, Emmay Entertainment is happy to back the "extremely potent drama" and said the film has a sensitive script. "To have the inimitable Rani Mukerji helm the cast line up is nothing short of a coup that has powered us to raise the bar," she said. Shariq Patel, CEO, Zee Studios said "Mrs Chatterjee vs Norway" fits into their vision of backing path-breaking stories.

"We are pleased to collaborate with Rani for the first time. She has several memorable roles to her credit whether it is playing a fierce cop or a teacher battling all odds. She is such an evolved and powerhouse actor. "It will be a delight to see how Ashima has envisioned Mrs Chatterjee's character. We cannot wait to bring this story to the audiences," Patel said. Currently, in the pre-production stage, the film is expected to go on floors soons.